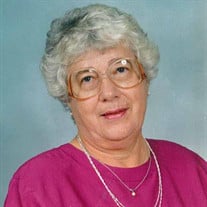 Funeral services for Madge Wilson are scheduled for Wednesday, January 6th at MMS-Payne funeral home at 2:00 pm. Friends may visit at the funeral home on Tuesday, January 5 from 1pm-8pm, with family receiving visitors from 6pm-8pm. Madeline Ruth Wilson was born on August 17th, 1931 in Binghamton, New York to Fred and Marion Stevens. She passed from this life on December 31st of 2020. Madeline (Madge) was a 1950 graduate of Marathon High School in Marathon, New York. Soon after graduation, Madge went to work at Dover Air Force Base in Wilmington, Delaware. It was there that Madge would meet her lifelong love, Art Wilson. When the Air Force transferred Art to Wiesbaden, Germany, Madge found a way to be transferred to the same base. This tenacity was one of the hallmarks of her life. It is a characteristic found in her children and grandchildren to this day. Soon after arriving in Germany, Art and Madge were married. Their union lasted over forty years and was filled with love and laughter. In addition to working over twenty years at the cafeteria of Sequoyah Public Schools, Madge volunteered as a Cub Scouts and 4-H leader influencing the lives of young people throughout the area. If you were to ask Madge what her greatest accomplishment was in life, she would, first, point to her family. She worked tirelessly to provide opportunities and experiences for her children throughout her life. In addition, she was always quick to offer encouragement and praise for her children and grandchildren as they were the centerpiece of her life. In a life well-lived, Madge taught her family valuable lessons in hard work, friendship, pride, and perseverance. She will be dearly missed, but her legacy lives on in her family. She is survived by her three children, John Wilson, Sylvia Hensley, Lee Wilson, their spouses, Rhonda Wilson, Brett Hensley, Charlene Wilson, eight grandchildren, and seven great grandchildren. Those who wish to honor Madge’s memory may make memorial donations to St. Jude’s Children’s Hospitals, 501 St. Jude Place, Memphis, TN 38105.

Funeral services for Madge Wilson are scheduled for Wednesday, January 6th at MMS-Payne funeral home at 2:00 pm. Friends may visit at the funeral home on Tuesday, January 5 from 1pm-8pm, with family receiving visitors from 6pm-8pm. Madeline... View Obituary & Service Information

The family of Madeline (Madge) Ruth Wilson created this Life Tributes page to make it easy to share your memories.

Funeral services for Madge Wilson are scheduled for Wednesday,...

Send flowers to the Wilson family.