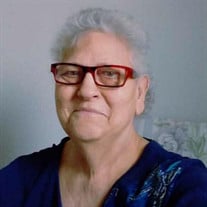 Mary Anne Allison, seventy-five-year-old Vinita resident, passed away peacefully at her home on June 17, 2021. She was born on January 14, 1946, to Marvin Winters Grunden and Pearl Deloris (Ward) Grunden in Palo Alto, California. Shortly after, the family moved to Vinita, where she graduated from Sacred Heart Catholic School in 1963. She attended cosmetology school in Miami, Oklahoma. On May 2, 1965, she married the father of her children, Wesley C. Allison. While her children were in school, she was a substitute teacher and active member of the White Oak Booster Club. She was always helping with anything that needed to be done, from sponsoring the cheerleading squad to baking goodies for bake sales, and organizing talent shows and concerts. She never missed any of her children's sporting events. After retiring from Cinch Connectors in 2014, she enjoyed arts and crafts, especially painting. She loved watching her grandchildren play sports, and spending time with family. Mary was preceded in death by her mother, father, and two sons, Claudie and Shaun Allison. Survivors include her son Steve Allison and daughter Tina White and husband John, all of Vinita; grandchildren Amber Allison of Owasso, Jennifer Richard and husband Steven of Orange Park, FL, Allison White of Vinita, Chuck White and Cassandra of Narcissa, OK, Cody Allison of Warner, OK, and Dylan Allison, Ian Allison, John White, and Mike White, all of Vinita; great-grandchildren William, Diana, and Grace of Narcissa, OK, and Dominick, Luke, and Conner Richard of Orange Park, FL, and Rebecca, Elena, and Samantha Allison of Warner, OK; sister Irene Cornwell and husband David of Nowata; brother Charles Grunden of Talala; and a host of other family and friends.

The family of Mary Anne Allison created this Life Tributes page to make it easy to share your memories.

Send flowers to the Allison family.