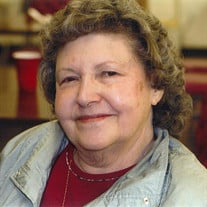 Service for Mary Margaret Bell will be 10:00 a.m., Tuesday, November 19, 2019 at First Baptist Church in Inola; burial will follow at Blue Springs Cemetery.  Friends may visit at the funeral home on Monday from 2pm-8pm; family will receive visitors from 6pm-8pm.  Mary passed away on Friday, November 15, 2019.  She was 84.    Born June 8, 1935 in Gideon, Oklahoma to Marvin Nicholas and Stella Irene (Snodgrass) Givens, Mary received her education in Tahlequah.  On September 1, 1951 she married Calvin Oren Bell, the couple made their home in Tahlequah for a time and several other places before settling in Inola in 1957.  In the late 1980's they moved to the family farm in Teresita and lived until 2014, when they moved back to Inola.      Mary was a wonderful wife and mother; she enjoyed taking care of her family and her home.  Her cooking skills were second to none and she made the most detectable cobblers you could ever taste.  She loved having her family near and especially those grandchildren.  The elementary school in Inola also enjoyed her cooking abilities.  Mary was a member of the First Baptist Church in Inola and later when they were in Teresita, she attended Zion Baptist Church.    Those family members that survive include her husband Calvin of the home; her daughters Nakita Orender and husband Jeff and Donna Vaughan and husband Bo; her sister Jennie Waterdown; her grandchildren Trisha Miller and husband Shawn, Tiffany Farrar and husband Tyler, Cheyenna Vickers and husband Max, and Callie Vaughan; her great grandchildren Hunter Surrett, Gus Robertson, Gunner Farrar, Baylee Farrar, Austin Miller, Allie Evans, Cash Bates, Rylea Bates, Jax Vickers and Clover Vickers.  Mary was preceded in death by her parents, her brothers Stanley Givens and Junior Givens and sister Fannie Hubbard.

Service for Mary Margaret Bell will be 10:00 a.m., Tuesday, November 19, 2019 at First Baptist Church in Inola; burial will follow at Blue Springs Cemetery.  Friends may visit at the funeral home on Monday from 2pm-8pm; family will receive visitors... View Obituary & Service Information

The family of Mary Margaret Bell created this Life Tributes page to make it easy to share your memories.

Send flowers to the Bell family.