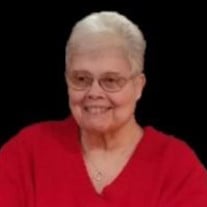 Mary Lu Bible went to be with her Lord and Savior on July 12th with her beloved family by her side at the age of 77. Mary Lu was born on January 29, 1944 to George T., Jr. and Lilly Louise (Morrison) Jarvis. She attended Whitehill and Chelsea Schools, graduating with the CHS class of 1962. On August 24, 1962 she married Denver Bible and together they made their home in Chelsea, OK where they raised their three children. Mary Lu started her work career working for her parents at the Jarvis Texaco station, continuing to work their with her husband Denver who ran the station until selling it in January of 1997. She also worked as a dispatcher for Chelsea, Vinita and Tulsa providing 911 dispatch services for police, fire and Med-Tech ambulance until her retirement in 2005. Mary Lu also served as the secretary for the First Christian Church in Chelsea for many years. During her younger years she was a member of the Rainbow Girls, later becoming a member of the Eastern Stars, earning her 50 year pin. She also served as a board member for the Chelsea Alumni Association for several years. When Mary Lu traveled she greatly enjoyed going to Creede, CO and Branson, MO with Denver and the rest of the family. She was an avid collector of lighthouses and also enjoyed spending her spare time sewing things for her kids and grandkids. She loved her little dachshund companion, Raeni Nichole who was by her side for 12 years. Mary Lu was also well known for her homemade ice cream and candy cookies, both of which were family favorites.  This wonderful wife, mother, grandmother, great-grandmother, sister and friend will be missed by all who knew her. Mary Lu is preceded in death by her parents and brother Gary Jarvis. She is survived by her husband of 58 years Denver; son Keith Bible and wife Shelia of Foyil; daughter Cindy Lutz and husband Steven of Chelsea; son Michael and wife Shari of Broken Arrow. Grandchildren, who called her “Nanny”, Brittany Brown and husband Lawrence of Foyil; Clint Bible and wife Sam of Broken Arrow; Jared Lutz and wife Tayler of Chelsea; Aly Bickell and husband Lark of Bushyhead; Marisa Lutz of Chelsea; Jacob Bible and wife Caroline of Broken Arrow; Emily Bible of Broken Arrow; and Joel Bible of Foyil. Great-Grandchildren James, Emma, Maddie and Abby Bible; Ari and Whitley Brown; and Kyrie Lutz. Brother; Jim Jarvis and wife Judy of Broken Arrow. Along with a host of nieces, nephews and extended family.  In-lieu of flowers donations may be made to the Chelsea Alumni Association; P.O. Box 391 Chelsea, OK 74016

Mary Lu Bible went to be with her Lord and Savior on July 12th with her beloved family by her side at the age of 77. Mary Lu was born on January 29, 1944 to George T., Jr. and Lilly Louise (Morrison) Jarvis. She attended Whitehill and Chelsea... View Obituary & Service Information

The family of Mary Lu Bible created this Life Tributes page to make it easy to share your memories.

Mary Lu Bible went to be with her Lord and Savior on July 12th...

Send flowers to the Bible family.