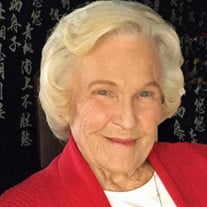 Funeral service for Merryll Jennings will be 1:00 p.m., Monday, February 28, 2022 at First United Methodist Church, burial will follow at Woodlawn Cemetery. Merryll Gay Jennings was born September 23, 1928 in Perry, Georgia to George P. and Edna (Gay) Hunnicutt. She grew up and was educated in Perry, graduating with the class of 1945. Merryll continued her education at Duke University, graduating in 1949. While attending Duke, she met a gentleman named Monroe R. Jennings, the couple married December 31, 1949. Their first home was in New York, where he served his residency at the U.S. Marine Hospital. The family next moved to Claremore and Dr. Jennings eventually opened his private practice in 1955. A wife and mother first, Merryll took great care of her family and made sure she provided them with everything they needed. When time allowed, Merryll enjoyed playing tennis with her friends and was meticulous at taking care of her yard. Following Dr. Jennings' passing, she applied for a job with the Claremore Tag Agency and began a long career there. An Arkansas Razorback fan, Merryll followed their football and basketball seasons with much anticipation. She also took care of the many birds that flocked to her yard, feeding them daily. Merryll was grandmother, "Bundy" to 18 grands and 23 great grands, with even two on the way. This wonderful mother, grandmother and friend will be missed by all who knew her. Those family members that survive include her children George Jennings and wife Deborah and their kids, Natalie, Michael, Courtney, Jennifer, and Zachary; Malinda Reed and her children Ashley, Jordan, and Bailey; daughter-in-law Teri Jennings and her children Byron, Caroline, John, and Robert; Martha Jennings and husband Rafael Reyez; John Jennings and wife Tracy and their children Peyton, Sydney, and Houston; Jan Jennings Brown and her children Bliss and Blake; and David Jennings and wife Kristin and daughter Reagan. Merryll was preceded in death by her parents, husband Dr. M. R. Jennings, sons Robert Scott Jennings and Mark Byron Jennings, and her son-in-law Dr. Darryl Reed, sisters Marilyn Trotter and Meredith Whitten. Those who wish to honor Merryll's memory may contribute to Oklahoma Alliance For Animals, 5321 South Sheridan, Ste 30, Tulsa, Oklahoma 74145.

The family of Merryll Jennings created this Life Tributes page to make it easy to share your memories.

Send flowers to the Jennings family.