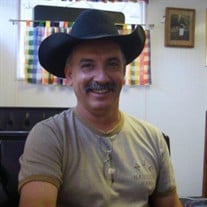 Funeral service for Michael Richard Ellick will be 2:00 p.m. Tuesday, February 15, 2022 at the First United Methodist Church of Chelsea. Visitation will be at Chelsea Funeral Home and Cremation Service on Monday, February 14, 2022, from 1-8 p.m., with family greeting friends from 6-8 p.m. Michael passed away in Tulsa on Thursday, February 10, 2022. He was 63 years old. The son of Benjamin Richard and Vera Leola (McCreary) Ellick was born October 9, 1958, in Claremore. He began school at Osage School in Pryor, and later attended Pryor schools before transferring to Chelsea High School his sophomore year. He graduated from Chelsea High School in 1976. While in school, he participated in many activities, such as football, baseball, wrestling, and showing pigs and steers. He was also a member of the horse judging team. At the age of 10, he decided he wanted to ride a calf. This was the beginning of his bull riding career. In 1979, he attended Claremore Junior College on a rodeo scholarship. That year he was the Intercollegiate Bull Riding Champion. That was also the year that he met Virginia McSpadden, who he would marry on September 29, 1980. The couple made their home in Bushyhead. Michael continued his rodeo career for a time, and in 1991 he was the AINFR Rookie of the Year. Michael's work career included jobs for Worthington, 4D Energy, Clem McSpadden, and lastly, Baker Hughes, where he retired when his health prevented him from continuing to work. In 2018, Michael became reacquainted with his old friend Janice White. The two were married on June 29, 2019. Michael enjoyed many activities in his spare time, such as fishing, hunting, skeet shooting, and golf. But his favorite pastime was anything to do with his children or grandchildren, especially helping them with their show animals. Michael is preceded in death by his parents, Benjamin Ellick and Vera and Alton Obar. Survivors include daughter Mikah Howard, husband Barney, and their children Taylor, Tylee, and Tynslee; son Trent Ellick, wife Bobbi, and their daughter Lena; daughter Kaitlyn Hicks, husband Josh, and their children Ayden, Christian, Isayah, Sierra, Ashlinn, and Autumn; step-son Joshua Hughes, wife Veda, and their children Katana, Wrangler, Angelica, Michelle, Sophia, and J.R.; and step-son Mike Hughes, wife Shelly, and their children Devon and Austin; and sisters Kathy Lowes, Benita Ellick, Sherry Inman and husband Jeff, and Raylene Berka and husband Frank. View and sign Michael's online memorial at www.mmsfuneralhomes.com.

Funeral service for Michael Richard Ellick will be 2:00 p.m. Tuesday, February 15, 2022 at the First United Methodist Church of Chelsea. Visitation will be at Chelsea Funeral Home and Cremation Service on Monday, February 14, 2022, from 1-8... View Obituary & Service Information

The family of Michael Richard Ellick created this Life Tributes page to make it easy to share your memories.

Funeral service for Michael Richard Ellick will be 2:00 p.m....

Send flowers to the Ellick family.