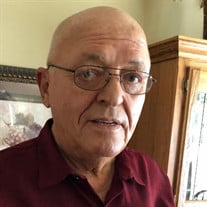 It is with deep sorrow that the family of Michael Kolosiej, 74, announce his peaceful passing on Tuesday, November 2, 2021. Mike, a Ukrainian immigrant, came to this country as a 5 year old child escaping a German holding camp via ship to Ellis Island. He grew up to become a proud American who selflessly served his country as a United State’s Air Force Sergeant during The Vietnam War. After leaving the service he settled in Victorville, CA where he met and married the love of his life, Deanna Bills in 1983. He was a hard worker who believed in the idea of the American dream. His work lead him to move to Odessa, TX where he worked as a dedicated employee at CEMEX until his retirement in 2012. Retirement guided him to Claremore, OK where he would enjoy the remainder of his life surrounded by the beauty of Oklahoma with his wife by his side. He was a devoted father and grandfather who took advantage of any opportunity to spoil his grandchildren. Mike was a man of few words, yet strongly opinionated. He was an avid Christian who enjoyed spending his free time reading The Bible and rejoicing in the love of our Savior, Jesus Christ. Michael is preceded in death by his parents, John and Lydia Kolosiej; sister Olga Truglio; and brothers John and Taras Kolosiej. He is survived by his wife Deanna Kolosiej; daughters Natalie Fitzgerald and husband Jon; Krystyna Vestal and husband Scott; Tanya Leon and husband Joe; his stepchildren Scott Lynch and wife Carla; Kristi Prewitt and husband Kevin; his grandchildren Haleigh, Jon Michael, Kelsey, Paige, Joseph, Makayla, Greenlee, Brookelyn, Grayson, Connor, Harrison, and Joe; great-grandchildren Trystan, Jaxon, Rosilee, Harleigh, and Easton; his brothers Peter and Eugene Kolosiej; sister Daria Garcia; and numerous nieces and nephews. The family wishes to send a special thank you to the staff at the Jack C. Montgomery VA Hospital for their extraordinary care and compassion.

It is with deep sorrow that the family of Michael Kolosiej, 74, announce his peaceful passing on Tuesday, November 2, 2021. Mike, a Ukrainian immigrant, came to this country as a 5 year old child escaping a German holding camp via ship to... View Obituary & Service Information

The family of Michael Kolosiej created this Life Tributes page to make it easy to share your memories.

It is with deep sorrow that the family of Michael Kolosiej, 74,...

Send flowers to the Kolosiej family.