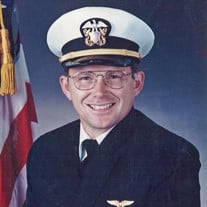 Memorial service for Murry Wayne Estabrook, Sr. will be 10:00 a.m. Saturday, July 24, 2021 at Claremore First United Methodist Church. Visitation will be at MMS-Payne Funeral Home on Friday, July 23, 2021 from 6-8 p.m. Murry was born May 3, 1951 In Muscatine, Iowa, to Murry Alfred Estabrook and Virginia Nadine Estabrook. In 1968, he met the love of his life, Debra. They were married on June 6, 1971. They were together for 53 years, and recently celebrated their 50th wedding anniversary. Murry received his draft notice in 1969, but decided to join the US Navy in 1970 on the delayed entry program. The Navy would become his career. In 1980, he graduated from OU with a Bachelors in Aerospace Engineering through the Naval Enlisted Scientfiic Education Program and received his Officer Commission. He went on tours with VQ-1 Squadron in Guam, Japan, and the South Pacific. He also worked as a Naval Aviation Instructor, and received the Navy Achievement Medal in 1987. He was the first and only Naval Instructor to teach all four Navy Academic Phases in the history of the Naval Air Training Unit at Maher, AFB in Sacramento, CA. He served in WESTPAC with the Fleet Electronic Warfare Group in San Diego, CA, and was an ROTC instructor at University of Missouri Columbia before retiring from active duty in 1993. He spent 27 years teaching High School JROTC in Arkansas and Oklahoma, with the final 18 years serving Claremore and the surrounding communities. He was a blood drive coordinator with Oklahoma Blood Institute, planning and coordinating 50 successful blood drives at Claremore High School. He was elected Teacher of the Year in 2007, and was the Oklahoma Blood Institute Volunteer of the Year in 2020. Throughout his life, Murry loved serving others. He and Debra traveled the world together as they raised their five children. They also became a foster family home provider to numerous children as an Emergency Care Home. Murry enjoyed gardening, tending to his apple trees, bee keeping, antique and classic cars, cruising in his 1954 Mercury Sunvalley, building models, and listening to the Beatles and old country classics. But most of all, he loved spending time with his grandchildren. Murry is preceded in death by his parents, a sister, and two brothers. Survivors include brother John Estabrook and wife Bonnie, sisters Cindy Carver and husband Phil, and Kim Graff and husband Steve; his wife Debra; children Murry Wayne, Eric, Timothy, Crystal, and Alicia; and nine grandchildren. In lieu of flowers, memorial donations may be made to Oklahoma Blood Institute.

The family of Murry Wayne Estabrook created this Life Tributes page to make it easy to share your memories.

Memorial service for Murry Wayne Estabrook, Sr. will be 10:00...

Send flowers to the Estabrook family.