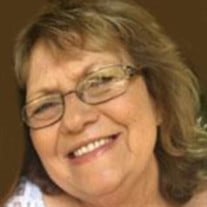 Memorial service for Myrna Barbee will be held 10:00 a.m. Monday, June 29, 2020 at Wofford Cemetery in Catoosa. Myrna passed away on Saturday, June 20, 2020 at the age of 69. The daughter of Wiley and Ruthie Scott Berry was born June 17th, 1951 in Claremore, Oklahoma. She was raised in Catoosa where she would spend all of her early life. It would also be the place that she would meet David Barbee. They would eventually begin dating, and married on February 14, 1973. The newly wed couple made their home in Catoosa. Being a life long Catoosa resident, it only seemed fitting for Myrna to begin working for the City of Catoosa. There she started working as a police dispatcher. Over the years she would wear many hats for the city, most recently serving as the Financial Director. Although Myrna was a dedicated employee of the city, her family was her first priority. As the mother of three boys Myrna's job didn't end when the city closed for the day. She often rushed home cooked dinner and delivered them to many after school activities. This dedication also extended to many others outside her immediate family. Often she would wake to find extra kids at her home. This happened so often that her grocery list include favorite snacks for them as well. As her boys grew older, her family would expand. Her grandchildren would replace her children as the favorites of the house. Holidays and family gathering became the days that she enjoyed the most. In those rare times when she wasn't busy, Myrna loved relaxing on the couch with a good book. She is preceded in death by her parents, Wiley and Ruthie Berry; sister, Janice McDonald, and brother Rodger Berry. Survivors include her husband David Barbee; children, Josh Barbee and wife Carissa, Jeff Barbee and Jon Barbee; siblings, Ronald Berry and wife Marilyn, and Randy Berry and wife Gail; grandchildren, Ashton Sparks, Michael Barbee, Megan Barbee, Austin Barbee, Haley Barbee, Alyson Sherwood, and Logan Sherwood; bonus grandchildren, Jordan, Kaiden and Chase, and many other extended family. View and sign Myrna's online memorial at www.mmsfuneralhomes.com

Memorial service for Myrna Barbee will be held 10:00 a.m. Monday, June 29, 2020 at Wofford Cemetery in Catoosa. Myrna passed away on Saturday, June 20, 2020 at the age of 69. The daughter of Wiley and Ruthie Scott Berry was born June 17th,... View Obituary & Service Information

The family of Myrna R. Barbee created this Life Tributes page to make it easy to share your memories.

Send flowers to the Barbee family.