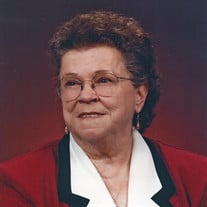 Graveside service for Naomi Correll will be 10:30 a.m., Friday, August 16, 2019 at Ridgelawn Cemetery in Collinsville. She passed away on Thursday, August 8, 2019, at the age of 86. Naomi was born on April 7, 1933 in Ramona, Oklahoma to Clarence and Mildred (Morgan) Russell, she attended school in Ramona and few other communities. In 1955 she married Willard Sorber, and this union was blessed with four children. A mother first, Naomi made sure her children were well taken care of. When they were older, she returned to the classroom and studied nursing. She loved taking care of people, and when she finished her nursing school, she went to work for Claremore Hospital. Later she worked for St. Francis Hospital. Naomi finished her career in nursing at Rogers County Health Department, retiring in 1989. When she wasn't hard at work or taking care of her family, Naomi enjoyed fishing, needle work, and sewing. She was involved with the Eastern Stars, holding the position of Worthy Matron at one time. Her most precious time was spent with her family, especially her grandchildren. Naomi loved all sports, and followed her OU Sooners football team. She was looking forward to this year’s season. Naomi was preceded in death by her parents, Clarence and Mildred Russell, her daughter Kathy Sorber Ridge, her son Tommy Sorber, her grandson Brock Morgan, her sister Betty Smith, and brothers Henry Russell and Robert Russell. Those family members that survive include her son Ron Sorber and wife Sandra, daughter Shelly Rhine and husband Rod; her grandchildren Casey and Sarah Sober, Sean Sorber, Mandy Morgan and husband Jerry, Rodney Rhine and wife Kim, A.J. Rhine and wife Megen, and Stephanie Stimson and Spencer Mills; her great-grandchildren Wyatt Morgan, Saige Morgan, Summer Morgan, Luke Rhine, Callison, Rhine, Jackson Rhine, Baker Rhine, Adian Stimson, and Ava Mills; her sister Margie Delk; special caregivers Janet Gray and Cassidy Henderson, and many nieces and nephews.

The family of Naomi Correll created this Life Tributes page to make it easy to share your memories.

Send flowers to the Correll family.