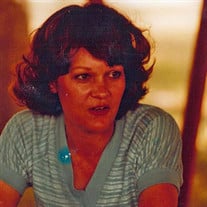 Memorial service for Nita Jo Chambers will be 11:00 a.m., Friday, March 19, 2021 at Eastern Hills Baptist Church. Nita passed away on Monday, March 15, 2021 at home with her family by her side. She was 77. Nita was a loving wife and mother who lived a fun and exciting life, full of travel, adventure, and loved ones. She went home to the kingdom of heaven on Monday, where her body was healed and she rests in the arms of her Lord and Savior. Born to Phillipa (Kolley) and Henry Orr in Claremore, Oklahoma, Nita attended Segeeyah and Sequoyah Schools and was a part of a big farm family. She often said, "we were poor, but we didn't know it", and how much fun it was to be able to roam the woods, with a "poking stick". She enjoyed roaming the woods until her final days, and the "poking stick" is now a family tradition that has been passed down to future generations. From humble beginnings, she married Earl Chambers in 1961 and began a most colorful life of a traveling Soldier's wife. As an officer's wife, Nita was expected to uphold the formalities and responsibilities that come with that role. She had to learn to host diplomats and dignitaries at white glove formals, as well as impress general's wives with her etiquette and attention to detail. She excelled and loved everything about being a good soldier's wife, including the forced travel, and comforting wives who had lost their husbands to the Vietnam War. She made the most of each assignment. Just an example, the family lived on the east coast, west coast, Europe, and many bases in between, Nita saw the entire country, but always wanted to return to Claremore, to home... In 1981, she did indeed return to Claremore following Earl's retirement, where she and Earl built their "forever" home, north of town and embraced their hometown. Nita worked at Rogers County Bank and First Bank until she retired in 2004. She and Earl were also ranchers and she worked alongside him, baling hay and feeding cattle. Nita got a lot of enjoyment from her animals, from saving a calf to taking in strays. She also really enjoyed people, especially helping them, and being the matriarch for both sides of the entire family. All family gatherings were at her house, and she was the best host ever. There were so many birthday parties, visitors, Christmases, celebrations, funerals, laughs, and memories made in her kitchen; it truly was the heart of the family. Nita was also part of the Will Rogers Roundup Club family, having volunteered there for over 40 years as well as her sorority the Omicron Masters of the Beta Sigma Phi. Nita was a gifted artist who could draw, paint, and create art out of almost anything, from canvas to cakes. Early on, she worked as a Max Factor makeup artist, traveling the midwest making homely women look better, but the travel was too much and she wanted to be with her children. She had an odd sense of humor, and loved to scare people with rubber snakes, ghost stories, fake blood, and then would laugh her head off. She also liked the slots. Nita especially loved her kids, Bill and Dawn. No matter what, you could go to mom, and she would support you 100%. She might chew you out, but she never turned away from you. If she thought you were making a bad decision, she would tell you, then support your choice. Those family members that survive include her husband Earl; her daughter, Dawn Petty and her family, son, Bill Chambers and his family, as well as too many friends and family to list.

Memorial service for Nita Jo Chambers will be 11:00 a.m., Friday, March 19, 2021 at Eastern Hills Baptist Church. Nita passed away on Monday, March 15, 2021 at home with her family by her side. She was 77. Nita was a loving wife and mother... View Obituary & Service Information

The family of Nita Jo Chambers created this Life Tributes page to make it easy to share your memories.

Send flowers to the Chambers family.