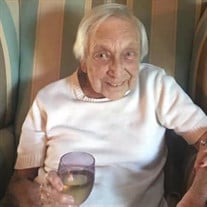 A Memorial Service will be held for Olga Douglas on Saturday, July 18th, 2020 at 10:30am at Redeemer Lutheran Church located at 220 N. Seminole in Claremore, OK. Olga passed away peacefully Friday evening July 10, 2020 at home surrounded by her family.  She was 96 years old.  The facility will COVID-LY seat 70 people in the chapel and an additional 75+ people in the Fellowship Hall connected to the chapel where a video feed from the chapel will be shown. There should be plenty of room for anyone wanting to attend. Additionally, the service will be viewable LIVE by connecting to the Facebook link below for those with travel restrictions, anyone with fever, cough or showing signs of COVID19, and anyone with a highly compromised immune system. In order to allow as many people to attend that want to in person, we are asking masks be worn while inside the church. For COVID reasons, the service will be kept to approximately 1 hour or less and individual handouts for readings and singing will be provided. Olga is being cremated under the direction of MSM Payne Funeral Home in Claremore. There will be no viewing prior to services and no internment following the services. Many of you knew how important reading and the library was to Olga. As such, in leu of flowers, you may connect to the library link below to fill out a form and mail in an IN MEMORY OF OLGA DOUGLAS donation to FRIENDS OF THE LIBRARY. https://www.claremorecity.com/170/Friends-of-the-Library https://www.facebook.com/redeemerlutheranclaremore/about/?ref=page_internal Olga lived a life that was vibrant, and full of vitality and graciousness.  She was born in Hamburg Germany and met John R. Douglas of Winganon, OK in December of 1948 at a US military base office party at Rhein-Main AFB following WW2.  They married in Germany in 1951 and she immigrated to the United States in 1952 and became a US citizen.  Olga spoke 6 languages fluently. She spoke English better than most American’s.  Olga traveled with her husband during his continued service in the United States Air Force. They lived in Moses Lake, WA, Japan, Orlando, FL where they had a son, Donald Douglas, Anchorage, Alaska where they had a daughter, Karen Douglas Hinkle, then on to El Paso, TX to finish out John’s service to the military.  They then moved to Claremore, OK in June 1964 where John took a job with American Airlines and Olga raised her family and contributed to her community.   She was a member of Redeemer Lutheran Church.  She was well known and loved as a member of AFS, a substitute teacher at Claremore High School and private tutor for many years.  When Olga’s husband died 11 years after arriving in Claremore, a family friend and neighbor, Jack Mayberry assisted her with obtaining the job as the Rogers County Courthouse Law Librarian in 1976.  Olga had a love of books beyond compare, reading as much as a book a day.  She worked for the Claremore Progress as a Proof Reader and was also a long-standing member of the Claremore City Library Board and frequented the library weekly.  Olga worked at the Law Library until the age of 90, when she finally decided to retire.  Olga was also a long-time member of the Claremore Rec Center where she enjoyed sharing jokes with the other gym members whom she considered dear friends, and rightfully earning the nickname “The Boss”.  She was a huge advocate of healthy living and exercise.  She celebrated her 96th birthday at the Rec Center among good friends, working out in the weight room as she did 4 mornings a week.  She was well known for her little 1986 Red Ford Escort (affectionately known as THE BEAST) that she drove around town for 30 years.  Olga was an amazing mother, aunt and friend.  Always thinking of others before herself and always ready to laugh and make memories.  She will be greatly missed by so many family, friends and community members.  Olga was preceded in death by her Father Johann Nikolaus Langbeck, and Mother Olga Bertha Krogmann Langbeck, Sister Ilse Daniels and her husband Helmuth, a Brother Karl Henz, and her husband John R. Douglas.  She leaves behind a son, Don Douglas and wife Margaret of Oklahoma City, a daughter, Karen Hinkle and husband Mike of Claremore, grandchildren Jeremy Hinkle, Chris Hinkle, Ben Douglas and wife Megan, Kim Carkin and husband Tim, great grandchildren Norah and Owen Douglas, her sister in law, Dortha Reavis, and many nieces and nephews and their families.  Also left behind are her two remaining Muskateers, Mindie Babb and Brenda Lairmore.

A Memorial Service will be held for Olga Douglas on Saturday, July 18th, 2020 at 10:30am at Redeemer Lutheran Church located at 220 N. Seminole in Claremore, OK. Olga passed away peacefully Friday evening July 10, 2020 at home surrounded by... View Obituary & Service Information

The family of Olga Douglas created this Life Tributes page to make it easy to share your memories.

A Memorial Service will be held for Olga Douglas on Saturday,...

Send flowers to the Douglas family.