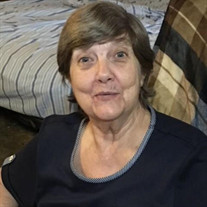 Ollie Virginia Donley on Sunday, October 18, 2020, with her beloved family around her, was called Home by the Lord. She was 77. She was born October 10, 1943 in Lake Providence, LA. She was raised in Texarkana, AR, and graduated Arkansas High school in 1961. She attended Southern State College, later Texarkana Beauty School and Texarkana Business school. She me the love of her life Kenneth Donley at a school swimming party in 1959. They went on to marry April 8, 1961 and moved to El Paso, TX. She later made homes in Texarkana, AR, Lewisville, AR, Plano, TX and finally Claremore, OK. She was a homemaker and over the years she wore many titles: Daughter, Sister, Student, Cosmetologist, Secretary, but the titles she cherished the most were devoted wife, loving mother, and loyal friend. She was a 50-year member of the Order of the Amaranth. She was known for her cooking which was a staple of many Masonic dinners and has fed Masons in three states. Everyone that knew her loved her. She was proceeded in death by her brother Tommy Lamar Whitehead, Mother Mattie Lee Whitehead, Father Henry Van Whitehead, and cherished Mother-in-law Virginia Strange Donley. She is survived by her beloved husband of 53 years Kenneth William Donley of Claremore, OK, Daughters Donna Yvonne Donley and Dianna Virginia Donley also of Claremore, OK. Sister Sharon Ann Minx and husband Rusty of Texarkana, AR, Nieces Richanna Sharon Whitehead and Husband David of Genoa, Ark and Rashell Lea Stone and husband Tim of Tyler, Tx. Nephew Rusty Lamar Minx and wife Jennifer of North Carolina, Many great nieces and nephews and her lifelong best friend and sister of the heart Betty Jane Manker of Payette, ID.

Ollie Virginia Donley on Sunday, October 18, 2020, with her beloved family around her, was called Home by the Lord. She was 77. She was born October 10, 1943 in Lake Providence, LA. She was raised in Texarkana, AR, and graduated Arkansas High... View Obituary & Service Information

The family of Ollie Virginia Donley created this Life Tributes page to make it easy to share your memories.

Send flowers to the Donley family.