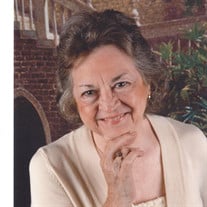 Oweta “G” Lou Robertson, 74 passed away peacefully at 8:25 AM, Thursday, April 1st, 2021, at home in Chouteau. She was surrounded by her loving family. Oweta was born December 2nd, 1946 in Arizona. She is the daughter of Easter Ellen Hoge and James Woodrow Hoge. She married Richard “Red” Robertson on March 26th, 1965. He was the love of her life and together they celebrated 56 years of marriage. Oweta worked at AMI, Inc for 15 years but was a homemaker as well. Oweta was known for her kind heart. She was always willing to help anyone in need and never met a stranger. Her smile could light up a room and she always made everyone feel welcomed in her presence. Family was always her number one priority. One of her greatest passions was to re-visit Silver City, New Mexico where her Dad lived. She enjoyed traveling with Richard, which included numerous trips to Wichita Falls and Branson as well as cruises. She was a wizard when it came to sewing and she loved to cook! Oweta is survived by her loving husband Richard Robertson of Chouteau, OK. Along with her two sons Rusty (Michelle) Robertson of Chouteau, OK and Dale Robertson of Tulsa, OK; one daughter, Jammi (Tony) Parsons of Broken Arrow, OK; grandchildren Stormy (Sarah) Robertson of Wagoner, OK, Kelsey Robertson of Wagoner, OK, Tori (Jacob) Phelps of Wagoner, OK and James Parsons of Broken Arrow, OK; 5 great-grandchildren; two sisters, Frances (Chuck) Sundberg of Broken Arrow, OK and Annamarie Maresca of Albuquerque, NM; as well as numerous nieces and nephews. She was preceded in death by her parents and brother Frank Wilkerson.

The family of Oweta Lou Robertson created this Life Tributes page to make it easy to share your memories.

Send flowers to the Robertson family.