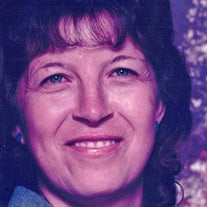 Graveside service for Big Cabin resident, Patsy Lee Tune, will be 2:00 pm Monday, January 27, 2020, at Chelsea Funeral Home chapel. Visitation will be at the funeral home from 11 am to 1 pm the same day. Patsy passed away at her home in Big Cabin on Tuesday, January 21, 2020. She was 78 years old. She was born in Claremore, OK on May 25, 1941, to Cecil Carl McMullin and Virginia Lee (Mitchell) McMullin. She grew up and attended school in Chelsea where she graduated with the class of 1959.This is also where she met the love of her life, John Tune, on main street. They were married in 1962, and raised their family in Big Cabin. She was a great homemaker and mother, never missing an event that her children were involved in. Her children remember the homemade cinnamon rolls and donuts that she often had waiting for them after school. In 1988, Patsy began working, first at the luggage factory, and later the sewing factory, and even a restaurant job. She was never afraid of hard work. In her spare time, she enjoyed fishing, traveling to the mountains of Colorado, attending swap meets and car shows, listening to Elvis music, and watching game shows on TV. Patsy was preceded in death by her father, Cecil McMullin, her husband John Tune, her sister, Marita McMullin, and her daughter, Phyllis Standingwater. Those left to mourn her passing are her mother, Virginia McMullin, her children, Pam Butcher and husband Donald, Paula Butcher and husband Steve, Penny Wallis and husband Lynn, Patti Goins and husband Ronnie, son-in-law Mike Standingwater; Peggie Claypool and husband Eddie, and Phoebe Lewis and husband Chris; grandchildren, Kristy Outhier, Michael Butcher, Daniel Butcher, Tiffany Pratt, Joshua Wallis, Kaylee Wallis, Shane Goins, Ethan Goins, Tara and Maddie Standingwater, Skye Tullis, Dell Ann Upp, Bethyne Keener, and Nathaniel Lewis; eleven great-grandchildren; and sisters Linda McKee and Sharon Dick. View and sign Patsy's online memorial at www.mmsfuneralhomes.com.

Graveside service for Big Cabin resident, Patsy Lee Tune, will be 2:00 pm Monday, January 27, 2020, at Chelsea Funeral Home chapel. Visitation will be at the funeral home from 11 am to 1 pm the same day. Patsy passed away at her home in Big... View Obituary & Service Information

The family of Patsy Lee Tune created this Life Tributes page to make it easy to share your memories.

Send flowers to the Tune family.