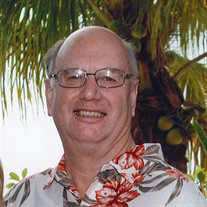 Memorial service for Randy Allen Moseley will be 10:00 a.m., Monday, August 26, 2019 at Blue Starr Church of Christ. Friends may visit at the funeral home on Sunday, August 25, from 1pm~6pm at the funeral home, family will receive visitors from 3pm~6pm. Randy passed away on Wednesday, August 21, 2019. He was 65. Born March 26, 1954 in Oxnard, California, to George Samuel Moseley and Gail Ruth Keith Mosley Hilton. Randy began his education in Ventura, California, before moving back to Marietta, Oklahoma. He graduated as a member of the Marietta class of 1972. Upon graduating, Randy enlisted with the United States Air Force. After his discharge from active service, Randy served in the Air Force and Army reserves ending his proud military career in 1978. In 1986 he became a safety investigator for the U.S Department of Transportation. This career took him many places in the United States. In 1972 Randy married Pam Thacher and to this union a son was born. He later married Judy Bramlett in 1976 and they were blessed with two children. In 2014 he married Debra Gayle Hurley and the couple made their home in Verdigris, Oklahoma. In 2001 Randy left the Department of Transportation. He then opened his own safety consulting business. His primary work was with trucking companies in north Texas, and Oklahoma. When Randy wasn't hard at word he enjoyed keeping up with his beloved Dodgers baseball team. He also loved to take cruises with Debbie and go camping. Most important was his family, especially his grandchildren. Randy had a great since of humor and loved being with family and friends. Randy was preceded in death by his father, George Samuel Moseley and his son Robert Samuel Moseley. Those family members that survive include his wife Debra of the home, his children Jennifer Gail Johnson of Mesquite, Texas, and Gregg Allen Moseley of Stafford, Virginia; step-son, Brian Germany of Afton; mother Gail Hilton of Marietta, Oklahoma; his step-mother Violet Brown of Wewoka, Oklahoma; sisters, Karen Elliott of Mustang, Oklahoma and Judy Emberling of Lone Grove, Oklahoma; brother, Wayne Moseley of Sana Rosa Beach, Florida; 4 grandchildren, and 3 step grandchildren.

The family of Randy Allen Moseley created this Life Tributes page to make it easy to share your memories.

Send flowers to the Moseley family.