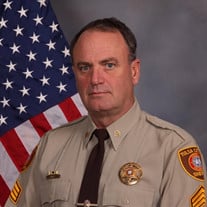 Memorial service for Randy Pierce was held 10:00 a.m. Tuesday, July 30, 2019 at the Sandusky Avenue Christian Church. John Randolph "Randy" Pierce passed away on Thursday, July 25th, 2019 at the age of 58. The son of Charles and Betty Boyer Pierce was born on May 15, 1961, in Tulsa, Oklahoma. There Randy would spend his entire childhood. As he became older he began attending Nathan Hale High School. He would graduate there as a member of the class of 1979. Upon graduation, Randy took a job working for the Tulsa Police Department in the records division. This, however, wasn't his only job. During this time he also worked for the Tulsa Twisters, a local pro-rodeo team where he competed as a bull rider. As time moved on, Randy left the Twisters and the Tulsa Police Department, and began working for Dow Chemical. This job eventually relocated him to Baton Rouge, Louisiana. In no time at all, Randy adapted to his new life in Louisiana. He quickly made himself available to his community by serving as a a volunteer firefighter for St. George Parish. As he normally did, Randy found himself climbing the ranks, and in just a short time, found himself serving as the fire Chief. In 1993, Randy had the opportunity to take an early retirement from Dow Chemical. This allowed him to return home to Tulsa. After a short time off, Randy took a job with the Tulsa County Sheriff's Department. He was proud of the opportunity to serve his home community. He served not only as a deputy, but also as part of the department's competition cooking group, Badges and Barbeques, and as a board member for MADD/Greater Oklahoma Victim Impact Panel. Randy loved serving the community, and while performing a welfare check on May 1, 1998, he faced an officer's worst fear. He was met by a gunman, and was shot four times. In pure Randy fashion, his wounds healed and he returned to work at the Sheriff's department. In his spare time, Randy had many things he enjoyed. He liked to go dancing at local clubs. In fact, it was at a local dance club in 1996 that he met his wife Ruth Ann. He also enjoyed hunting, fishing, horse racing, and traveling to Las Vegas. To say that he was an Oklahoma Sooner fan might be an understatement. He, along with many of his family, missed very few games, and always looked forward to tailgating. Randy was many things to many different people. To his family he was uncle Randy or Po Po, for others he was the origination of their nicknames. However, to all, he was the man who knew no strangers, the life of the party, and the helper of all. He is preceded in death by his parents Charles Pierce Jr. and Betty Boyer Pierce. Survivors include his wife Ruth Ann Pierce; children, Taylor Pierce and companion, Matt McKinney, Amy Powers and husband Brett, and Matthew Fields and wife Stephanie; grandchildren, Bryson and Liam; brothers, Charles Pierce III and wife Lesa, William Pierce and wife Kim, and Don Pierce and wife Vickie; nieces and nephews, Charles {Little Eddie}, Jeanie, Kourtney, Trevor, Nicholas, Heather, Liz, Aaron, and Kailynn, and great nieces and nephews, Madeline, Harper, and Channing.

The family of Randy Pierce created this Life Tributes page to make it easy to share your memories.

Send flowers to the Pierce family.