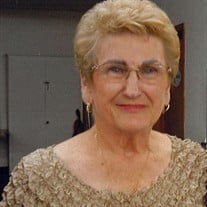 Roberta Marie Conrow-Metzger passed away Saturday, January 23, 2021 surrounded by her children, at the age 89. The daughter of Ernest & Esther Rardin was born on June 2, 1931 in Baxter Springs, Kansas. She was raised on a farm in the Baxter Springs area and attended a one room schoolhouse where all the students could fit on a single horse. When she was older, she moved to Tulsa where she met and married Jerry Conrow. In 1959, they made Inola their home and together they raised five children. Roberta was loved by many and never met a stranger. She was a great cook and loved to have family gatherings. She was a beautiful woman, a wonderful mother, grandma, and great grandma. She loved being part of the Inola United Methodist Church, Inola Senior Citizens, and ESA. When she and Jerry retired, they moved to Flint Ridge for a few years and there she helped start Flint Ridge’s first church. They later moved to Chouteau Mazie Landing, where she enjoyed boating and fishing with family. In 1998, they moved back to Inola where they would stay. After her husband’s passing, she later married Jay Metzger and lived in Inola. She was very active in the lives of her children and grandchildren. She is proceeded in death by her parents Ernest & Esther Rardin, her husband Jerry Conrow, brothers Charles Rardin and Dewayne Rardin, daughter Debra Hayes, daughters-in-law Beverly Meeker and Deborah Meeker, and son-in-law Don Hendricks. She is survived by her husband Jay Metzger (who passed away two days after Roberta) and sons David Meeker and wife Joyce of Inola, Donald Meeker of Inola, daughters Charla Hendricks of Claremore, Connie Sauer and husband Joe of Inola, son-in-law Jeff Hayes of Kansas, OK, 16 grandchildren, 39 great- grandchildren, 10 great-great-grandchildren, and numerous nieces and nephews. She also leaves behind many loving friends. She was the heart and soul of her family and will be forever missed. In lieu of flowers, donations can be made in Roberta’s name to Inola United Methodist Church PO Box 908 Inola, OK 74036 or Inola Senior Citizens Center PO Box 913 Inola, OK 74036.

Roberta Marie Conrow-Metzger passed away Saturday, January 23, 2021 surrounded by her children, at the age 89. The daughter of Ernest & Esther Rardin was born on June 2, 1931 in Baxter Springs, Kansas. She was raised on a farm in the Baxter... View Obituary & Service Information

The family of Roberta Marie Conrow-Metzger created this Life Tributes page to make it easy to share your memories.

Send flowers to the Conrow-Metzger family.