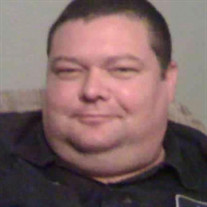 Funeral service for Ron Bickford will be 10:00 am Saturday, February 20, 2021, at Westwood United Pentecostal Church in Claremore. Burial will follow at Chelsea Cemetery. Friends may visit at MMS-Payne Funeral Home in Claremore on Friday, February 19, from 4-7 p.m. Masks and social distancing will be required at both events. Ronald Ray Bickford passed into the arms of his Savior on Tuesday, February 16, 2021. He was 53 years old. Ronald and his older sister Pauletta were born in Claremore, OK, on July 4, 1967, to Paul Stanley Bickford and Ruby Nadine (Jones) Bickford. He spent his early childhood in Claremore, later moving with his family to Ferndale, Michigan. In 1980, Ron's family returned to Oklahoma, settling in Chelsea. He began attending Chelsea schools and the Chelsea United Pentecostal Church. He graduated from Chelsea High School in 1985. It was in church that he met the love of his life, Susan Little, in 1984. The two were married in their home church on May 29, 1987. They enjoyed 33 years of married life, and were blessed with two sons. Ron began his working career at a young age with a paper route while living in Michigan. After moving to Chelsea, he and Pauletta mowed yards around town, and he also worked as a dishwasher at his aunt's restaurant. During high school, he worked at Western Auto in Chelsea, followed by a few years at Hobo Foods in Claremore, where he managed the dairy, bread, and frozen food departments. One year after marrying Susan, he began working at Nupar Manufacturing in Claremore, where he met many wonderful friends. He performed 27 years of faithful service until increasing health issues coincided with the closing of the company, forcing his retirement. For the first two years of his marriage, he also worked every day to help construct the sanctuary of the Chelsea United Pentecostal Church. It was completed in 1989, and he was proud of his contribution. Through the years, his church involvement included running the sound board, driving the bus to bring children to church, and serving on the church board. He seldom missed a service. Ron was a gentle soul who loved to laugh and joke with people. He had a running joke with his pastor about which was better, Fords or Dodges. Ron also had a gift of making conversation with anyone, whether he knew them or not. He was a good listener who was genuinely interested in the details of people's lives. He was a wonderful husband, father, son, brother, and friend. He will be deeply missed. In his spare time, Ron enjoyed woodworking. He was a member of the Rogers County Woodworkers Group, and contributed toys to their Christmas toys for tots drive. His favorite activity was spending time with his family, and his faithful companion, Boone. Ron is preceded in death by his father, Paul Stanley Bickford, and his father-in-law Winston Little. He leaves behind his wife Susan, sons, Brandon and Geoffrey Bickford, his mother Ruby Bickford, sister Pauletta Smith and husband Dexter, nephews Greg Smith and wife Kristal, and Garrett Smith, mother-in-law Betty Little, and brother- and sister-in-law Scott and Nancy Little, along with numerous aunts, uncles, cousins, and extended family. In lieu of flowers, memorial donations may be made to the Chelsea United Pentecostal Church, 5833 Prairie Rd., Chelsea, OK, 74016. View and sign Ron's online memorial at www.mmsfuneralhomes.com.

Funeral service for Ron Bickford will be 10:00 am Saturday, February 20, 2021, at Westwood United Pentecostal Church in Claremore. Burial will follow at Chelsea Cemetery. Friends may visit at MMS-Payne Funeral Home in Claremore on Friday,... View Obituary & Service Information

The family of Ron Bickford created this Life Tributes page to make it easy to share your memories.

Funeral service for Ron Bickford will be 10:00 am Saturday, February...

Send flowers to the Bickford family.