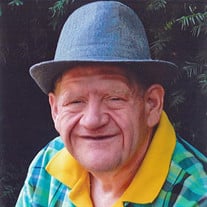 Memorial service for Ross Stonebarger will be 10:00 am on Thursday, April 25, 2019, at MMS-Payne Funeral Home Chapel in Claremore. Ross passed away at home in Pryor on April 13, 2019. He was 57 years old.        Ross was born in Sallisaw,OK on March 15, 1962, to Richard Perry Stonebarger and Alice Faye Stonebarger. He was raised in Sallisaw , before moving to Pryor as an adult. He worked at the Clothes-N-More store in Claremore .     Ross was an enthusiastic person who enjoyed many pursuits. He loved going to the zoo and Jenks aquarium with his roommate Dale and his friends .  He loved being around kids, watching John Wayne movies, and movies in general, and going to Wal-Mart. He also enjoyed fishing, feeding the ducks, dancing, collecting flashlights and pens, playing guitar, and playing with walkie talkies. Elvis was his superhero; Christmas and Halloween were his favorite holidays .    He is preceded in death by his father Richard Perry Stonebarger.    Ross is survived by his  roommate , Dale Troyer and his friends, Breann Richard, Diana Six, Owen Goss, Necario Duke, Charity Reed, Michaela Wadely , Cassidy Messer, Brenda Miller, Delores Newton, Lesley  Bryant, and Cora Jarrett.

The family of Ross Stonebarger created this Life Tributes page to make it easy to share your memories.

Memorial service for Ross Stonebarger will be 10:00 am on Thursday,...

Send flowers to the Stonebarger family.