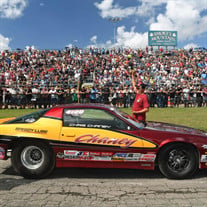 Service for Russell Chaney will be 10:00 a.m., Tuesday, October 6, 2020 at Cedar Point Church, burial will follow at Washington Cemetery. Friends may visit at the funeral home on Monday, October 5 from 1pm-8pm, with family receiving visitors from 5pm-8pm. Russell passed away on Tuesday, September 29, 2020 at home with his family by his side. He was 66. Born October 27, 1953 in Nowata, Oklahoma to Benton Russell and Thelma Mae (Patton) Chaney, Russell lived in Claremore all his life, graduating with the class of 71, from Claremore High School. His work career began while he was in high school, following his graduation he went to work for Standard Oil and later for Keck Construction, where he learned everything about asphalt and operating heavy machinery. In the mid 80's Russell and Vickie purchased the Speedy Lube in Claremore and together have operated this business for over 35 years. Russell's life long hobby and passion was racing, this started when he was 15. It began while he watched his neighbor George Cottom work on cars. He would hear George revving the engine and out the door he would go. The sport of racing became a family affair with everyone participating. A quiet man with few words, Russell taught his children by example. His love for his family was evident in the way he took care of them. He also mentored many broken souls along the way, helping them get a start. Russell's grandchildren were the most special people in his life and they knew it. Together with Vickie, Russell and his family made a great team on the track and off. Those family members that survive include his wife Vickie; his children Lance Chaney, Chris Chaney and wife Samantha, and Lauren Bendabout and husband Dustin; his grandchildren Trinity Chaney, Brandon Chaney, Clayton Bendabout, Peyton Chaney, and Jace Chaney; his mother Thelma Chaney; his sister Linda Horton and husband Chuck. Russell was preceded in death by his father Benton Chaney and his son Bryan James Chaney. Those who wish to honor Russell's memory may consider contributing to the Drag Racers Benevolent Fund, 3643 North Highway 77, Waxahachie, Texas 75165. View and sign Russell's online tribute at www.mmsfuneralhomes.com

Service for Russell Chaney will be 10:00 a.m., Tuesday, October 6, 2020 at Cedar Point Church, burial will follow at Washington Cemetery. Friends may visit at the funeral home on Monday, October 5 from 1pm-8pm, with family receiving visitors... View Obituary & Service Information

The family of Russell Chaney created this Life Tributes page to make it easy to share your memories.