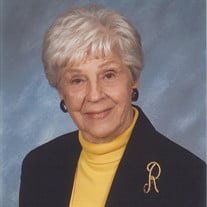 A memorial service for Ruth will be held at the First United Methodist Church of Checotah on Sunday, May 15, 2022, at 2:00 p.m., with a reception following. The service will be live-streamed on the church’s Facebook page: https://m.facebook.com/checotahfumc/. Ruth Ellen Garnett Sharpe of Checotah, Oklahoma, passed away peacefully on Sunday, May 8, 2022, in Claremore, Oklahoma. She was 101. Ruth was born in Altus, Oklahoma, on September 4, 1920, the daughter of Elmer Logan and Lela Ethelyn Barnard Garnett. She graduated from Altus High School (1937), attended Stephens College (1937-38), and then graduated from the University of Oklahoma (1941), earning a BS degree in physical education. She was a member of Kappa Kappa Gamma social sorority, lettered in horsemanship, and taught riding at Cheley Camp, Estes Park, Colorado. She married her college sweetheart, Louis (Lou) Kerre Sharpe, III, on April 27, 1942, at her home in Altus. She then spent her honeymoon traveling with Lou while he trained for World War II. In 1945, Lou and Ruth moved to Checotah, where they raised their four children and where Lou ran Sharpe’s Department Stores. Ruth was the first woman elected to the Checotah City Council, knocking on doors to campaign with baby Logan in his carriage. Her service was a point of great pride for her. Ruth was a member of the First United Methodist Church of Checotah and a 75-year member of the P.E.O. Sisterhood. Ruth was a life-long lover of any competition, a championship golfer, and a horse show exhibitor, winning with the high-point horse of the national Paso Fino horse show at Kansas City in 1986. She began playing bridge as a grade-schooler, learning by watching her parents play, and became a silver life-master duplicate bridge player. Ruth was a gardener with prized peonies and an animal lover who raised Angus cattle on her own farm for 20 years. Many of her calves were used for show by local FFA members. Ruth is survived by many competitors who were glad to see her retire and leave the field for them. Ruth was preceded in death by her husband, Lou Sharpe, and son, Luke (Holly) Sharpe. She is survived by her remaining children and their spouses: Sally Hutchinson (John Cartwright), Jane Sharpe, and Logan (Donna) Sharpe. She has eight grandchildren: Kerry and Tom Sharpe, Lela and Carolyn Hutchinson, Logan and Jim Abrams, and Renza and Will Sharpe. She also has 12 great-grandchildren, as well as many nieces and nephews. Ruth loved her family and treasured each family gathering, especially the Garnett reunions in Ruidoso, New Mexico. In lieu of flowers, donations can be made in Ruth’s honor to P.E.O. Chapter BX, c/o Carolyn Hutcherson, 715 SW 2nd Street, Checotah, OK 74426 (funds will be directed to the Oklahoma P.E.O. Projects Fund, Inc.), or to the First United Methodist Church of Checotah, 419 W. Gentry Avenue, Checotah, OK 74426.

A memorial service for Ruth will be held at the First United Methodist Church of Checotah on Sunday, May 15, 2022, at 2:00 p.m., with a reception following. The service will be live-streamed on the church&#8217;s Facebook page: https://m.facebook.com/checotahfumc/. Ruth... View Obituary & Service Information

The family of Ruth Ellen Sharpe created this Life Tributes page to make it easy to share your memories.

A memorial service for Ruth will be held at the First United...

Send flowers to the Sharpe family.