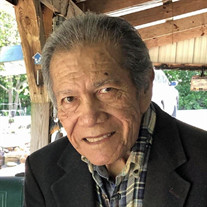 Samuel Weeks O’Fields was born on March 10, 1934 in Delaware County, Oklahoma to Joe William O’Fields and Ollie Mockicin O’Fields. He departed from this life on October 15, 2020 in Tulsa, Oklahoma at the age of 86. Samuel was known affectionately by his close family as “Sonny”. After the death of their mother, Sam and his two younger sisters, Annie and Mary,were sent to Sequoyah Orphan training school. Sam was 8 and his sisters were 6 and 4. Sam did his best to comfort and protect them while they were there. This would become a chapter in his life where he would prove to be strong and resilient. Sam was a veteran of the United States Army, serving from 1956-1962, as a tactical operations and equipment specialist. Sam received the Cherokee Nation Warrior Award for his service. Sam worked as an auto mechanic for the Tulsa Police Department and he took great pride in keeping the police forces auto fleet up and running until his retirement. Sam was a talented and celebrated Cherokee fiddler. Sam perfected playing the fiddle, guitar, steel guitar, bass and could sing with such beautiful harmony. Sam began playing the fiddle in his early teen years and was taught the fiddle by his dad, while his younger sister Annie was learning to second him on the guitar. Sam possessed the same skill set of even the most classically trained musicians. He played beautifully, but he enjoyed playing a more country music style. One of the highlights of Sam’s career was being a charter member of the country and western band known as the Chiefs. This talented group traveled all over the United States, sharing their music while making a living. Sam was a member of the Cherokee Fiddlers Association and was featured on a segment of OSIYO TV, along with his close friend John Church and the Bigfeather brothers, Jerry and Robert. Sam was inducted into the Oklahoma Fiddlers Association Hall of Fame in 2013. Sam has shared the stage with the likes of Leon McAuliffe and in 2004, Carrie Underwood. Sam was a member of the P.O.T.L.U.C.K Society of Claremore (People Out To Learn Using Care and Kindness). Samuel is preceded in death by his parents: Joe and Ollie O’Fields; one brother: Joseph Weeks O’Fields; four sisters: Mary Ruth Colbert, Marilyn Leggett, Virginia Ruth O’Fields and Mary Leach; three nephews: Dennis Lamb, Samuel W. O’Fields, Jonathan Colbert; and one niece: Ashley Colbert. He is survived by his wife Linda, of the home; one sister: Annie Lamb of Rocky Ford, Oklahoma; two brothers: David O’Fields and Harold O’Fields of Tahlequah, Oklahoma; and one daughter Anetta Boney. He also leaves behind many nieces, nephews and friends. Sam is undoubtedly singing and playing his fiddle in the heavenly choir.

The family of Samuel "Sam" Weeks O'Fields created this Life Tributes page to make it easy to share your memories.

Send flowers to the O'Fields family.