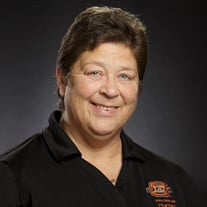 Sandra Kay Peterson passed from this life on May 7, 2021. Sandy was born in Miller, South Dakota on March 15, 1961 to Dale Glen Peterson and Grace Annette Schuette Peterson. She has two sisters Lynnette and husband Lawrence, Patty, and brother Dennis. Sandy was “favorite Aunt Sandy” to Meghan and husband Kaleb, Tyler, Anthony, Jessica, Lindsey, Matthew, Samantha, Dylan, and Kenlee. She also was a favorite of her great nieces and nephews: Ava, Sadie, Jack, Asher, and Wesley. In addition to her family, Sandy leaves behind many dear friends. Sandy was always a free spirit and became a foreign exchange student her junior year of high school, spending a year in Australia. After graduating from Fairland High School in 1979, she attended school at Northeast Oklahoma A and M and earned an associate degree before taking a few years to explore, living in Minnesota, Utah, and Arkansas. Sandy enlisted in the Oklahoma National Guard where she served from 1989- 1997 and earned many awards in her various areas of service. She was most proud of her marksmanship award. Sandy eventually moved to Stillwater where she finished her bachelor’s degree in microbiology in 1994 and her master’s degree in nutritional science in 2009. She worked on campus for many years in the microbiology and nutrition labs. She participated in 13 published studies. Sandy was always a die-hard Cowboy; you were always sure to get an OSU shirt for any gift-giving opportunity. In March 2016, Sandy participated in the Strongest Cowboy competition at Oklahoma State University. She was able to complete every event. She was the oldest participant and many other competitors came to shake her hand. Sandy definitely had the largest fan base complete with “Team Sandy” shirts. After retiring from Oklahoma State University two years ago, Sandy moved to Chelsea and worked for Community Options, Inc. She quickly became a part of the community. In her spare time Sandy loved crafting and woodworking. She has produced many personalized plaques for family and friends. She was also an avid gardener and raised a beautiful vegetable garden. She was always willing to share the produce with friends and neighbors. She loved nature and had mentioned many times that she would like a tree planted in her honor. Sandy was a “crazy dog lady” and her greatest love was her four rescue dogs: Sheila, Freckles, Coco, and Peanut. The sign on her front door said it all, “Four mutts and a bitch.”

Sandra Kay Peterson passed from this life on May 7, 2021. Sandy was born in Miller, South Dakota on March 15, 1961 to Dale Glen Peterson and Grace Annette Schuette Peterson. She has two sisters Lynnette and husband Lawrence, Patty, and brother... View Obituary & Service Information

The family of Sandra Kay Peterson created this Life Tributes page to make it easy to share your memories.

Send flowers to the Peterson family.