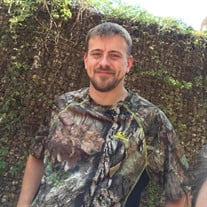 Shawn Patrick Crump, age 40, of Claremore, Oklahoma, passed away from this life on Monday, November 15, 2021, in Claremore, OK. Shawn was born May 3, 1981, in Stuttgart, Germany at Bad-Cannstatt Army Base, to Carolyn Crump. Shawn resided with Carolyn in Germany, until returning to the US at the age of 7 months. He stayed with his grandparents until age 2, when he returned to Germany to live with his mom until they transferred to Texas. Shawn saw much of the United States while growing up, residing in Texas, South Carolina, Georgia, and Arkansas, until settling in Arkansas in 1995 then Claremore, OK in 2006. While living in Waldron Arkansas Shawn met and married the love of his life, Rebecca Marie Barham. Shawn and Becca were married June 12, 2004. While in Arkansas Shawn work for J & C Land and Timber Logging Company before moving to Oklahoma. Shawn was a tinkerer and fixer. He could be found taking things apart and putting them back together, even before he could walk, and this continued throughout his life. He was a Jack of All Trades and a skilled machinist. He worked for C&C Machine in Claremore, and most recently for QMI in Pryor, OK. Shawn had a passion for car racing. He was the proud owner of a 2001 Trans Am Firebird. He spent many hours working on the Firebird and keeping it ready to race at the Tulsa Raceway Park, with his friends at HomeGrown Racing. He also loved to spend time out on the lake fishing or just spending time with Becca the kids and their friends. Shawn fiercely loved his family and worked hard to provide and care for them. No matter how much he had worked or how tired he was, he was always willing to lend a helping hand. If you needed something he was always there, all you had to do was holler. He could come up with a solution to any problem that presented itself. Shawn is survived by his mom and stepmom, Carolyn, and Erin Crump of Claremore; his loving wife, Rebecca Marie Crump of Claremore, son Harley McCain Crump and fiancé, Jean Thomas, of Little Rock, Arkansas, daughters: Haleigh Marie Crump age 16, Kimberlee Lynn Crump age 9, and Kourtney Sue Crump age 8 and his granddaughter, Lilith Blake Crump age 15 months. His brothers by heart: Robert Lance Gleason and wife Kari of Claremore, and Michael Cooper of Choteau. His uncles: Wayne Crump and Sally Witzke of Hennessey, Oklahoma, George Crump and wife Dixie Crump of Boles, Arkansas. Stepsiblings: JD Cox, Trista Richmond and Kelly Cox of Waldron Ark, Joshua Hall of Florida. His cousins: Tiffany Bermudez, Shelby Crump, Clayton Crump, Ben Crump, Jazmain Adamson, Mabel Adamson, and John Adamson. Nieces and nephews: Zach, Connor, Alyssa, Austin, Gauge, Skye and Coy. As well as his many dear friends. Shawn is preceded in death by his grandparents Ben and LouElla Crump of Boles Arkansas, who lovingly helped care for and raise Shawn. His Great grandparents Ott and Susie Rogers of Y-City Services at MMS Payne Funeral Home: 102 W. 5th Street, Claremore, Oklahoma Visitation, Monday, November 22, 2021, from 1pm-7pm, Family will be present between 5-7pm Service, Tuesday, November 23, 2021, at 2pm, with graveside service to follow. Burial, Woodlawn Cemetery, Claremore, Oklahoma Reception to follow at the American Legion until 7pm. 2141 OK-88, Claremore, OK Officiant: Pat Ray Biggs of Boles, Arkansas Pallbearers: Robert Lance Gleason, Michael Cooper, Brad Gottlob, TJ Caine, Jerry Barham, Justin Schneider. Honorary Pallbearers: Harley Crump, JD Cox, Joshua Hall, Jeremy Barham, Jason Cantrell, Brandon Hawthorne, Sam Thornton. It’s not - “it is what it is”, it’s - “it is what you make it”. We freaking love you, man! Memorial Fund has been established at RCB Bank in the name of Shawn P. Crump, to benefit Rebecca and the family.

Shawn Patrick Crump, age 40, of Claremore, Oklahoma, passed away from this life on Monday, November 15, 2021, in Claremore, OK. Shawn was born May 3, 1981, in Stuttgart, Germany at Bad-Cannstatt Army Base, to Carolyn Crump. Shawn resided with... View Obituary & Service Information

The family of Shawn Patrick Crump created this Life Tributes page to make it easy to share your memories.

Send flowers to the Crump family.