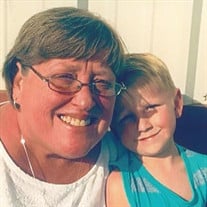 Sheila Ann Hixson was born December 10, 1957, in Claremore, Oklahoma. Her parents were Dorothy (North) Hixson and Obie Hixson. Sheila went to Heaven March 18, 2022. She was raised in Claremore where she attended Claremore Public Schools and Claremore Junior College. After receiving a double major in education at Northeastern State University, Sheila returned to Claremore to begin her career. She taught for Claremore Public Schools for many years, primarily junior high and middle school students. After retiring, she worked with her brother at Gordon Golf Course where she enjoyed camaraderie with many of the patrons. Sheila was a faithful church member and worker at Sequoyah Baptist Church where she had many friends. She dearly loved her church family. One of her favorite sayings was “God’s got this.” Sheila did not have children of her own, but she was a devoted supporter of her nieces and nephews. She liked to joke that not only was she an aunt, but she was a “GREAT” aunt. Preceding her in death were her parents, her brother Mike Hixson, her brother-in-law Ronald Deweese, her sister Carmenita Montgomery, her niece Tamara Judd, and her great-nephew Gabriel Moles. She is survived by sister Sharre Rader and husband Terry Joe ; sister Susan Deweese; sister Shirley Hutchison and husband Edgar; sister-in-law Laurie Hixson; sister-of-the-heart Jeannie Catherine Fairchild; and many nieces, great nieces, nephews, and great nephews: Heather, John, Micah (and wife Baylee), Seth (and wife Anna), and Trinity Moles; Misty and Shannon Reeder; Melody and Nick Burns; Chris, Crystal, Marley, and Daisy Cummins; Wes, Bonnie, and Owen Deweese; Miranda, Chris, Tyger, and Jetta Parkey; Natasha, Eli, Jentry, Gus (and wife Kassidy), and Wrenley Spence; Jacob Hutchinson; Lisa and Blaiden Hutchinson; Charlotte and Jack Richardson; Sam Hixson; Eric (and wife Erica) Judd; Andrea Judd and Andrew, Alivea, and Axton Hinds; and Stephanie Judd.

Sheila Ann Hixson was born December 10, 1957, in Claremore, Oklahoma. Her parents were Dorothy (North) Hixson and Obie Hixson. Sheila went to Heaven March 18, 2022. She was raised in Claremore where she attended Claremore Public Schools and... View Obituary & Service Information

The family of Sheila Ann Hixson created this Life Tributes page to make it easy to share your memories.

Send flowers to the Hixson family.