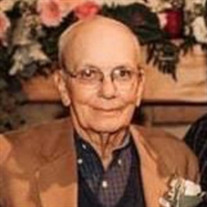 Sidney “Sid” Robert Richardson, 80, of Inola, Oklahoma, went to be with his Lord on Sunday, January 10, 2021 after a prolonged battle with cancer. Sid was born at the family home on Brushy Mountain near Sallisaw, Oklahoma to Truman and Margaret Virginia (Lesley) Richardson on January 6, 1941. He was one of seven children. Sid had a love for racing that started early in his life. By the age of ten he was earning money by riding racing quarter horses as a jockey to help support the family. He continued to do that for a few years until he had one too many accidents and his mother told him no more. In his early adult life Sid raced a 1931 Ford Victoria, No. 5, at the Tulsa and Muskogee Speedways. Later in his life, Sid kept his early interest in racing alive in new ways – by owning a race horse named “Big Red” and being part of the “crew” when his eldest son Bobby continued the family tradition of racing in a new No. 5 car. Sid was a man of many talents. Early in his life, he worked at Douglas Aircraft Company. Sid then worked laying brick with his older brother Tom. Finally, he went to work for C&C Tile where he worked as a ceramic tile setter for the next 35 years. Sid’s tile masterpieces can be found in numerous churches, hospitals, and homes in the Tulsa area (including many of his children and grandchildren’s homes). In 1980 Sid became a jeweler at West World Jewelry with his wife Ada. For many years this was Sid’s second job after finishing his day at C&C. Together Sid and Ada made many friends and Sid created beautiful jewelry for their customers. Following his retirement from C&C, he continued working with Ada at West World until they closed the store in 2010. Since that time, they’ve enjoyed their seven great grandchildren: Rylee and Ryan, Piper and Campbell, Rykar and Willow, and Magnolia; planting vegetable and flower gardens; and doing a little traveling, as well as playing some golf and bridge. Sid had five boys with his former wife, Mackie Sue Dillon. When his boys were young, Sid volunteered to coach elementary wrestling and baseball. In October 1977 Sid married the love of his life, Ada Mae Patzer Sanders, and his family grew with the addition of her three teenage boys. Sid and Ada actually met each other at a high school wrestling match, as their sons were similar in age and several of them were involved in the sport. After the boys started graduating from high school, Sid and Ada moved to the Mannford area and owned a farm where they raised cows and horses. At least two of his boys were relieved when this pastime was over and they were no longer needed to help with bailing hay. While in Mannford, Sid served his Lord and Savior by acting as an Elder at Lakeview Christian Church, where he helped to provide for the needs of others. Sid and Ada ultimately ended up in Inola, by way of Owasso, where they spent the last five years. Surviving Sid are his wife of 43 years, Ada Richardson of Inola; sons Jimmy (Denelda) Richardson (Jenks) and Kenny Richardson (Miami); step-sons Steve Sanders (Tulsa), Craig (Angie) Sanders (Minnesota), and Todd (Lisa) Sanders (Sand Springs). He is also survived by his five grandchildren: Tasha (Johnny) Garrett (Lawton), Courtney Keck (Oklahoma City), Alesha (Rod) Bryant (Inola), James Richardson (Sapulpa), and Luke (Bradie) Richardson (Collinsville) as well as his siblings Leon Richardson (Sallisaw), Troy (Gayle) Richardson (Sapulpa), Sue (Harvey) Hudgins (Sapulpa), and Truman Junior (Donna) Richardson,. (Texas). Sid was preceded in death by his parents; three of his sons, Bobby Richardson, Timmy Richardson, and Tony Richardson; and siblings Tom Richardson and Kay Pierson. His family will miss him, but know that they will see “The World’s Best Papa” one day soon. The family will be having an informal service (come and go) on Friday, January 15, 2021 from 5:00 p.m. until 7:00 p.m. at Inola Funeral Home, 310 N. Broadway, Inola, OK. This will be a time of sharing memories and celebrating Sid’s life. Interment will be at Graceland Memorial Park Cemetery, 14700 E 116th St ., Owasso, OK on Saturday, January 16, 2021 at 10:00 a.m.

Sidney &#8220;Sid&#8221; Robert Richardson, 80, of Inola, Oklahoma, went to be with his Lord on Sunday, January 10, 2021 after a prolonged battle with cancer. Sid was born at the family home on Brushy Mountain near Sallisaw, Oklahoma to Truman... View Obituary & Service Information

The family of Sidney Robert Richardson created this Life Tributes page to make it easy to share your memories.

Send flowers to the Richardson family.