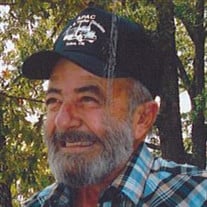 Graveside service for Steve Calico will be held on Tuesday, July 23, 2019 at Highland Cemetery in Inola. Visitation will be held on Monday July 24, 2019 at the Inola Funeral Home from 1-8 p.m. with family greeting friends from 6-8 p.m. Verle Steve Calico passed away on Thursday, July 18, 2019 at home at the age of 71. The son of Conley and Leone Siler Calico was born November 22, 1947 in Fayetteville, Arkansas. He was raised in Arkansas in the Crossroad and Buckeye area before moving to Tulsa. There he would later begin attending school at Mark Twain elementary, eventually graduating from Central High School in 1965. After graduation, Steve joined the United States Navy. Upon his discharge, he returned home to the Tulsa area. There he met Denise Richison. The two quickly fell in love, and after only six months of dating, were married on December 28, 1970. Steve and Denise made their home in Inola where they had three children and shared a beautiful marriage. He and his family owned and operated Calico Trucking. The next several years he continued driving a truck until deciding to take a job for APAC. He started there as a heavy equipment operator, working his way up to field mechanic before he retired in 2010. In his spare time, Steve loved spending his weekends at “Deer Camp,” where he spent over thirty years making memories with family and friends. He also enjoyed fishing and gardening but was the happiest when he was spending time with his children and spoiling his grandchildren. He is proceeded in death by his parents, Conley and Leone, and his beautiful wife Denise. Survivors include his children, Shane Calico, Amy Moore and husband Jerrod, and Corey Calico and wife Stephanie; grandchildren, Mikayla, Isabella, Chase, Kaiser, Daphne, Jack, Rowan, Andrew, Wyatt, Austin, Tyler, and Sarah; great-grandchildren, Jurnee, Wrenley, Dawson, Daxton, and Danielle; brother, Athel Calico and wife Karen and sister, Vikki Miller and husband Larry; sister-in-law, Louise Holland and husband Jim along with many other nieces, nephews, and other extended family.

Graveside service for Steve Calico will be held on Tuesday, July 23, 2019 at Highland Cemetery in Inola. Visitation will be held on Monday July 24, 2019 at the Inola Funeral Home from 1-8 p.m. with family greeting friends from 6-8 p.m.... View Obituary & Service Information

The family of Steve Calico created this Life Tributes page to make it easy to share your memories.

Graveside service for Steve Calico will be held on Tuesday, July...

Send flowers to the Calico family.