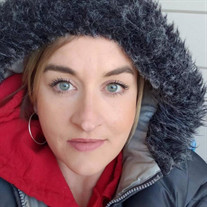 Service for Taylor Thesenivitz will be 10:00 a.m., Wednesday, August 25, 2021 at Tiawah Community Baptist Church, burial will follow. Taylor passed away on Wednesday, August 18, 2021. She was 34. Taylor Brooke Thesenvitz was born June 10, 1987 in Claremore, Oklahoma to Tammy (Lamb) Mack and Steve Thesenvitz. They were blessed with Taylor at a young age and she was their everything. She gave her heart to Jesus when she was in third grade and was baptized in her grandparents' swimming pool. Taylor rededicated her life to Christ when she was a teenager at youth camp. She began her school years at Tiawah before moving to Owasso. There Tammy married Corry Mack, who instantly became a father figure to Taylor. He was her biggest ally in life and always saved the day for her. She graduated from Owasso High School in 2005, where she was active in cheerleading and volleyball. Her grandparents, Steve and Georgia Lamb, helped raise Taylor until she was 8. She was like their 5th daughter. She absolutely loved to go fishing, especially with her grandpa. Taylor spent her last evening at their house with Brooks and came back brimming with happiness and love. Outgoing and always fun, Taylor cared deeply for her family and friends. Her younger sisters Gentry and Channing not only had parents to raise them, they had Taylor. Her nurturing and loving nature bonded them early on. When her boys came along, she was in her element being a mother. Grayson and Brooks were her pride and joy. Her favorite thing to do was go to Grayson's baseball games where you could hear her yell the loudest for her “Goose”. She was the sole parent to Brooks and loved to play with him. She was a very active mommy, spending time painting, reading, playing outside, and drawing with sidewalk chalk. Brooks has lots of stories about how funny his mommy is. She was excited for him to start T-ball. She adored her boys and they adored her right back. Taylor was very strong. She recovered from West Nile Virus in 2013, barely surviving the 2 months stay in ICU. She couldn't walk, sit up, or even hold her head up and both of her arms were paralyzed. She fought for years and finally overcame this. She was able to become a waitress and an invaluable presence at her dad's restaurant, Tastee Treat. The customers thought of her as their own and Taylor felt the same. In her other jobs, and everything she did, Taylor made lifelong friends. Her love and her humor will be missed by everyone she came in contact with. Taylor is survived by her son, Grayson Layne Wise and his father Casey Wise, son Brooks Steven Thesenvitz, and goddaughter Addison Wise; Her mother Tammy and husband Corry Mack; Father Steve Thesenvitz and Kim Vento; Siblings Gentry, Channing, Christian, and Chelsey Mack, Randi and husband Jeramy Finney, Greg and wife Krystal Goodson; Grandparents-Steve and Georgia Lamb, Ellen and Walter Broach, Janice Thesenvitz and Pauline Mack; Aunts and Uncles Angela and the late Dale Janz, Stacey Krager, Darla and Keith Mcgowan, Mike and Cindy Thesenvitz, Ramon Price, Steve Mack, Tanya and George Robinson, Tina and Leroy Redricks, Sheldon Mack, Kendell and Lana Mack, Felicia and Steve Smith; Susan Thesenvitz, Teri Keith, and Sonja Impastato were ladies that played an important role in Taylor's life, as well as Roger and Joy Wise. Also, many cousins, nephews, and other extended family members. She was preceded in death by grandfathers, Larrie Thesenvitz and Seymour Mack. For those wishing to honor Taylor's memory by donation, and account has been set up at BancFirst for her sons.

The family of Taylor Brooke Thesenvitz created this Life Tributes page to make it easy to share your memories.

Send flowers to the Thesenvitz family.