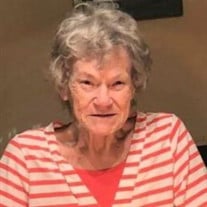 November 20, 2021, surrounded by her family, Thelma JoAnn Smith was reunited with the love of her life, Hal Leroy Smith, who preceded her in death. She leaves behind her son Christopher and his wife Michelle, and their children Jacob, Allison and Mason; Son Virgil, his daughter Sydni and husband Colton Failing and her first great grandchild, Paige. Thelma JoAnn Copp was born in Tiawah, Oklahoma on January 28, 1935 to Virgil Eugene Copp and Clara Louise Ulrey. She was the first of three children. She was preceded in death by her brothers, Virgil Patrick Copp and Jerry Samuel Copp. Thelma graduated from Inola high school where she was a basketball superstar. She went on to attend Oklahoma State and Santa Monica City College before transferring to California State University in Sacramento. During her time in California, she was crowned Miss Santa Monica in a beauty pageant. Thelma was always more than just a pretty face – she worked on the B-47 project, had Secret security clearance, and met Hal while working in electrical engineering on a special missile project. Hal and JoAnn were married November 18, 1961 in the First Methodist Church of Santa Monica. They moved to Sacramento in 1963. Hal attended McGeorge School of Law while JoAnn went to work for the Governor of California. Son, Christopher came along in 1967 and by 1968 the young family was living in Van Nuys, California as Hal began to ply his trade as an attorney and JoAnn enjoyed being a mom. Being California at the end of the 1960’s the Smith family decided that Oklahoma was the place to be, so they loaded up the car and moved to Claremore in July 1970 where they soon welcomed their second son Virgil. Thelma, as she was known in business, went back into the workforce in 1971 first in the petroleum industry, and later in the telecom business where she was the first employee of Southern Satellite systems, a company that was the pioneer of the products we now think of as cable television. Hal passed away April 8th, 1986 and in 1988 Thelma left the telecom industry to pursue other interests. Retiring in the late 90’s she spent time in Tulsa and later Bartlesville with her son Virgil and grand daughter Sydni. In 2014 she moved to Decatur, Texas to a little apartment close to Chris and Michelle’s farm to spend time with the other grand kids but not so often as to get put on the chores roster. Thelma enjoyed gardening, garage sales, jewelry and Choctaw Bingo. She loved spending time with her grandchildren and family and could often be found playing games with the kids (and adults) at the family table. She will be deeply missed by her friends and family.

November 20, 2021, surrounded by her family, Thelma JoAnn Smith was reunited with the love of her life, Hal Leroy Smith, who preceded her in death. She leaves behind her son Christopher and his wife Michelle, and their children Jacob, Allison... View Obituary & Service Information

The family of Thelma JoAnn Smith created this Life Tributes page to make it easy to share your memories.

Send flowers to the Smith family.