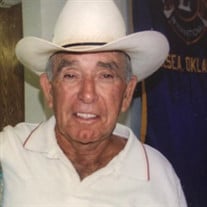 A memorial service for Tom Green will be held at the family rodeo arena on a date to be determined.     Tom Green passed away on January 15, 2021 at the age of 77.     Thomas R Green  know to most as "Tom" was born on July 27, 1943 in Claremore, Oklahoma.   he was the  son of Lloyd Thomas Green and Luchea Pettit Green. He was one of 8 children and their 3rd son. He grew up on the family farm in the Foyil - Sequoyah area.  He would later attended Foyil schools. As Tom became old enough to work he took a job as a truck driver working on the Oologah reservoir.  One weekend on short trip to Charleston, Arkansas, Tom met Billie Sue Martin.  They began dating and Tom moved to Arkansas.  The would marry on June 15, 1963 in Charleston.  For the next several years Tom continued to work as a Heavy Equipment Operator in Arkansas.  Eventualy he and his family would move to Mexico.  There Tom ran the Vermejo Park Ranch.  At the time it was the largest cattle ranch west of the Mississippi.  In 1975 Tom moved his family back to Oklahoma, establishing his own ranch.  Over the next several years Tom continued working for the Operators and Engineers Local # 627 and Local #12 out of California.  Tom eventually retired in 2005. In his spare time Tom enjoyed many things.  A couple of his favorites were steer roping and team roping. He also enjoyed a love for animals, especially dogs and horses.  However his family was his true love and he enjoyed every minute he got to spend with them. Tom is survived by wife Billie Green, son Joel Green and wife Janet, son Scott Green, daughter Melissa Plummer and husband Bruce, grandchildren Stephanie Green, Josh and Melissa Collins, Jake and Kaci Collins, Rachel and Blaine Luper, Hope Plummer. Great-grandchildren Jase Luper, Andy Collins, Elisa Luper.  Sister Dorothy Wofford, and Brother Mike Green. View and sign Tom's online memorial at www.mmsfuneralhomes.com

The family of Thomas Green created this Life Tributes page to make it easy to share your memories.

A memorial service for Tom Green will be held at the family rodeo...

Send flowers to the Green family.