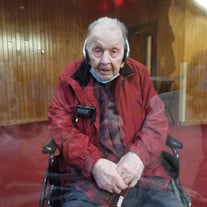 Service for Thomas Jefferson "Tom" Morgan will be 2:00 p.m., Friday, July 16, 2021 at MMS-Payne Funeral Home Chapel, burial will follow at Oakhaven Memorial Gardens. Friends may visit at the funeral home on Thursday, July 15 from 2pm-8pm, with family receiving visitors from 6pm-8pm. Tom passed away on Sunday, July 11, 2021. He was 94. Thomas Jefferson Morgan was born September 25, 1926 in Turnersville, Texas to James “Jim” Dawson and Clara Jane (Freeland) Morgan. He attended schools in Turnersville, graduating with the class of 1944. Tom continued his education at Texas Tech until he was drafted into the US Army in 1946. Following his honorable discharge, he returned to Texas Tech and finished his Bachelor’s degree in Psychology. On July 6, 1950, Tom married Fredda Fern Anderson, and the couple made their first home in Lubbock, Texas. Shortly after they were married, they moved to Fort Worth, Texas where Tom attended Southwestern Baptist Theological Seminary and earned his Master’s Degree in Theology. During his ministry, Tom pastored several small country churches, the first was Hodges just outside of Lubbock. He ministered there until he was called to Brownfield, Texas where he was pastor at Immanuel Baptist Church. In 1965, he moved to Gould, Oklahoma, and was pastor of First Baptist Church until 1972. The lord continued calling him northeastward to Oklahoma City, where he was pastor at Crutcho Baptist Church. His last calling was at Sageeyah Baptist Church in Claremore, Oklahoma. Tom retired from the ministry in 1987, but he didn’t slow down. He began a lawn mowing service and was often seen driving his beige pickup with his jenky old trailer full of lawnmowers, all over Claremore until his family’s insistence that he stop at the young age of 85. Tom never met a stranger, and was always ready to help anyone in need. His calling in life was ministering to people and taking care of his family. He always said the only way he knew to serve the lord was to serve others. Whether hospital visitation, peewee baseball coaching, helping with paper routes, showing the grandson how to repair a lawnmower carburetor, or fix a busted hose with a Dr. Pepper can and bailing wire, his life was a living example of showing true Christ-like love to his family and others. He is survived by his wife of 71 years, Fredda; his children Denise Rae Morgan and companion, Roger Talbot of Bonita Springs, Florida, Douglas Wayne Morgan and wife Lori of College Station, Texas, and Sherry Strickland and husband, Danny of Claremore; grandchildren Ryan Prewitt and wife, Stephanie of Mansfield, Texas, Jennifer Hall and husband, Chad of Spring , Texas and Dr. Kyleigh Strickland of Los Angeles, California; great grandchildren, Emma Hall, Kamrin McGuire and Rylin McGuire. Tom was preceded in death by his parents, his brother J.D. Morgan; sisters Ruth Bowles, Vela Mae Cook, and Mary Lee Guerriero.

Service for Thomas Jefferson "Tom" Morgan will be 2:00 p.m., Friday, July 16, 2021 at MMS-Payne Funeral Home Chapel, burial will follow at Oakhaven Memorial Gardens. Friends may visit at the funeral home on Thursday, July 15 from 2pm-8pm, with... View Obituary & Service Information

The family of Thomas Jefferson "Tom" Morgan created this Life Tributes page to make it easy to share your memories.

Send flowers to the Morgan family.