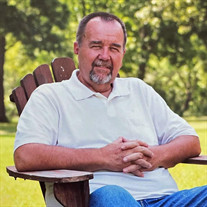 Services celebrating the life of Thomas Vernon "Tommy" Williams will be 2:00 p.m., Friday, April 16, 2021 at DestinyLife Church. Friends may visit at the funeral home on Thursday, April 15 from 3pm-8pm, with family receiving visitors from 6pm-8pm. Tommy passed away at his home on Sunday, April 11, 2021, with his family and friends by his side. He was 67. Born July 31, 1953 in Crosbyton, Texas to Thomas Clifford and Mary Frances (Allen) Williams, Tommy moved with his family at an early age to Orange County, California. His freshman year, they moved to Altus, Oklahoma, where he finished school there. Tommy met Jean Parks when he was 16 and she was 14 and told his friend that one day he would marry that girl. They eventually married and began their lives together in Altus. Tommy and Jean moved to Waxahachie, Texas for Bible college, and when he finished, their first calling was youth pastor at Duncan, Oklahoma. He later went to Tahlequah, Oklahoma as youth pastor, and in 1984, Tommy was called to pastor the Assembly of God Church in Electra, Texas and spent the next two and a half years there. In 1986 Tommy felt called to Claremore, where he and Jean's lifelong friends Glenn and Ami Shaffer were pastors at Church at Claremore. Tommy began his ministry part-time in the beginning while working as a paint contractor as well. For the last 21 years, Tommy has served on staff as executive pastor, administratively overseeing both Claremore and Owasso campuses and Claremore Christian School. His love for his church and the families it serves has had a huge impact on Tommy's life. In his spare time, Tommy enjoyed jogging with Jean. He also ran in the Tulsa Run and made a trip to Miami to run a half marathon. He was a sports fan, and he followed the OU Sooners. Tommy was most happy being with his family, especially his grandchildren who called him Pop. He leaves his loved ones with many special memories. Those family members that survive include his wife Jean of their home; daughter Kelly Jean Green and husband Joe; his grandchildren Jackson Joseph Green, Cannon Thomas Green, Chapel Cohen Green and Hope Anthem Green; his sister Pam Marston; sister-in-law and brother-in-law Judy and Darryl Cope, sister-in-law Janet Smith; nephews Wesley Cope and family and Destry Cope and family and niece Chelsea Marston and family. Tommy was preceded in death by his parents and his son Joshua Thomas Williams. A man of God, Tommy served throughout his life with the passion of winning the lost to Christ. In lieu of flowers, a special fund has been set up in honor of Tommy to support Dr. Rita Browning and Margie Stone of Mongolia Asia Reach. Tom's dream was to provide for these two faithful missionaries. Those who are interested may give to Tom Williams Memorial Fund at DestinyLife Church. You may give by texting (918)323-4999. Use the keyword Williams - then $ amount. Checks may be mailed to DestinyLife Church, 2300 Southaven Road, Claremore, OK 74019.

Services celebrating the life of Thomas Vernon "Tommy" Williams will be 2:00 p.m., Friday, April 16, 2021 at DestinyLife Church. Friends may visit at the funeral home on Thursday, April 15 from 3pm-8pm, with family receiving visitors from 6pm-8pm.... View Obituary & Service Information

The family of Thomas "Tommy" V. Williams created this Life Tributes page to make it easy to share your memories.

Send flowers to the Williams family.