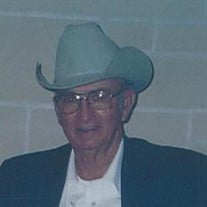 Tommy Lee Wilson, 80, passed away on September 24, 2020 in Tulsa, Oklahoma. Tom Was born on November 12, 1939 in Chelsea, Oklahoma to Orval and Edith Victory Wilson. He grew up in Chelsea and graduated from Chelsea High School in 1957. He married his high school sweetheart, Loretta Fay (Pat) Burchett on April 13, 1957. They celebrated their 63rd anniversary this year. He worked in Chelsea at the luggage factory and a gas station before working for Hester Electric Company as a lineman. He worked for many years at Chelsea Municipal Authority as foreman before retiring at 53. This is when his love of cattle and horses became his full-time career and he never looked back. Tom had many interests but being a great husband, father, grandfather and great-grandfather was his number one priority. He also loved quail hunting, deer hunting and occasionally fishing. He loved guns, knives and a good old-fashioned rodeo. He regularly enjoyed the company of his friends, coffee and conversation. Tom was an ever-present friend to those around him and was always in service to those in his family. Tom has discretely sponsored many local events and volunteered throughout the community. He could always be counted on to offer a hand and his resources to any person he might be of service. He was a believer in gentlemen’s rules, keeping his word and hand shake deals. Tom is survived by his wife Pat of Chelsea, Oklahoma and his son Tony of Tulsa, Oklahoma. Also, his sisters Ruth Skeans and Sharlene and Jim Regan of Claremore, OK; his grandson Garland Rexford Brinlee IV (Quatro) and his wife Kristine of Chelsea, Oklahoma; his granddaughter Lindsay Lynn Rose of Vinita, Oklahoma. His great grandchildren, Garland Rexford Brinlee V (Ford) and KennaDee Alexis Brinlee of Chelsea, Oklahoma and Gabriel James Boyce of Vinita, Oklahoma. Tom was preceded in death by his parents, Orval and Edith Wilson and brother Bobby and Don Wilson and sisters Bertha Wilson, Vivian Cauthen and Janice Brewer and his daughter, Teri Lynn Rose In lieu of flowers please make a donation in Tom's honor to the: American Cancer Society.

Tommy Lee Wilson, 80, passed away on September 24, 2020 in Tulsa, Oklahoma. Tom Was born on November 12, 1939 in Chelsea, Oklahoma to Orval and Edith Victory Wilson. He grew up in Chelsea and graduated from Chelsea High School in 1957. He... View Obituary & Service Information

The family of Tommy Wilson created this Life Tributes page to make it easy to share your memories.

Send flowers to the Wilson family.