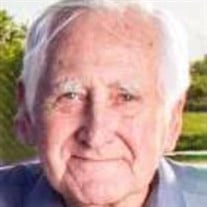 Graveside service for Van Buren Appelman, Jr. will be 2:00 p.m., Saturday, May 1, 2021 at Willis Cemetery, Willis, Oklahoma. Van passed away on Sunday, April 25, 2021. He was 93. Born July 31, 1927 in Enterprize, Iowa, to Van Buren Appelman and Pauline (Goldfuss) Appelman, Van attended schools in the area of his birth and was the first ever to graduate from Oklahoma Midwest City High School with the class of 1944. Following high school, Van attended Murray State College in Tishomingo, and while there he met Molly Bridges. The two were married on July 3, 1948 in Snyder, Texas. Shortly after their marriage they moved to Norman, where Van attended the University of Oklahoma and Molly worked in the business department. Van began his work career with Texaco as a surveyor. This took the young couple to many different communities in Oklahoma and Illinois. In 1967 he took a position at the Tulsa office and the couple settled in Catoosa, and this has been home since. In his spare time, Van enjoyed repairing old watches and clocks. He sometimes found the time pieces and clocks in the flea markets he frequently visited. Van also found time to work on his genealogy, something he and Molly loved doing together. He also enjoyed taking trips all around the country to take part in the Van Buren family reunions or traveling with family and friends. Those family members that survive include his son Ron Appelman and wife Shelly of Catoosa; his grandchildren Jeremy Appelman, Justin Appelman and wife Kara, and Tyler Appelman, all of Catoosa; great-grandchildren Cody Camp, Hailee Davis, Tragen Appelman, Nixin Appelman, and Piper Appelman; his sister and brother-in-law Pat and Bill Bailey; niece Phyllis Bailey and nephew B. J. Bailey; other nieces and nephews Margie Jean, Deborah, Rob, Gary, and John. Van was preceded in death by his parents, wife Marjorie Dean "Molly" Appelman, brother Paul Appelman, and sisters Margie Hay and Susie Powell. In lieu of flowers, please consider making a memorial contribution to either Claremore Veterans Center's Activity Fund, 3001 West Blue Starr Drive, Claremore, Oklahoma 74017, or Catoosa Historical Society, 207 North Cherokee Street, Catoosa, Oklahoma 74015.

The family of Van Buren Appelman Jr. created this Life Tributes page to make it easy to share your memories.

Send flowers to the Appelman family.