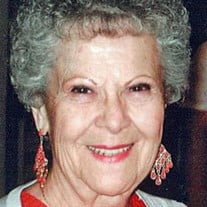 Funeral service for Vera Maxine Kuykendall will be 2:00 pm Thursday, May 23, 2019, at MMS-Payne Funeral Home Chapel. Burial will follow in Woodlawn Cemetery. Visitation will be Wednesday, May 22, from 1-8 pm, with family greeting friends from 6-8 pm. Vera passed peacefully at her home in Claremore on Saturday, May 18, 2019. She was 80 years old. Vera Maxine (Seabolt) Kuykendall was born on May 28, 1938, at Claremore Indian Hospital in Claremore, Oklahoma to William Seabolt and Cassie (Patterson) Seabolt. Vera was the youngest of twelve siblings. As a child, Vera grew up in the Muskogee and Haskell areas before her family settled in and near west Tulsa, Oklahoma. During her teenage years, Vera and her sisters would spend time together on Southwest Boulevard in west Tulsa. Vera noticed a nice looking young man drive by, and gave a whistle at Junior Kuykendall. He turned his car around to go back and meet Vera. Their life story began, including their marriage on May 3, 1954, and lasting another 56 years until Junior's passing in 2011. Vera and Junior together raised five children. Susie was three years old when Vera became part of their family, and their little family quickly became a family of seven; first Sharon, then Kirk, Bill, and Gail. In 1960, Junior and Vera purchased a 140-acre farm in Foyil, Oklahoma, where they remained for fifty years, moving only due to Junior's short illness. They then settled in the Sequoyah area where for the first time, they owned a house with central heat and air, a garage, and a front porch swing! Vera not only cared for the house and kids, but helped with every part of working cattle, pigs, and horses, and gardening as Junior's partner in his dream come true of life "on the farm". Vera also helped when needed by working outside the home at Tulsa and Claremore hospitals as an aide, also at Claremore Progress, and a few other jobs to help meet the needs of their family. One of Vera's hobbies and interests was traveling with Junior to churches and nursing homes to sing the gospel. She was an excellent self-taught seamstress, and she also enjoyed fishing, camping, and Branson country music shows. She was best at "raising babies", even after her own were out of the home. Vera is preceded in death by her parents, husband, seven brothers, two sisters, daughter Sharon Ross, and two sons, Kirk and Bill. She is survived by one daughter, Gail Bates and husband Garry of Grove, OK; step-daughter Susan Kassick and husband Jim Tom of Claremore, OK; grandchildren Chris Crow and wife Heather of Springdale, AR. Abbagail Monk and husband Brandon of Pryor, OK, Maurica Franklin and husband Lucas Lehigh, and Stephanie Botts and husband Chuck, all of Owasso, OK, Kara Lawhorn and husband Brandon of Sequoyah, Claremore; adopted son/grandson Jordan Kuykendall of Oklahoma City, OK; step-grandchildren Suzanne Gourd of Bristow, OK, and Jody Kassick of Tulsa, OK; eleven great-grandchildren, and five great-great-grandhildren. Also sisters Daisy Clary of Sand Springs, OK, and Mary Terry of Catoosa, OK, as well as many cousins, nieces, and nephews.

Funeral service for Vera Maxine Kuykendall will be 2:00 pm Thursday, May 23, 2019, at MMS-Payne Funeral Home Chapel. Burial will follow in Woodlawn Cemetery. Visitation will be Wednesday, May 22, from 1-8 pm, with family greeting friends... View Obituary & Service Information

The family of Vera Maxine Kuykendall created this Life Tributes page to make it easy to share your memories.

Funeral service for Vera Maxine Kuykendall will be 2:00 pm Thursday,...

Send flowers to the Kuykendall family.