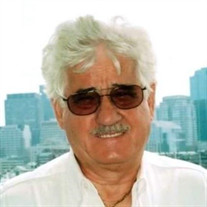 Virgil Pat Copp passed away on August 28, 2019.  He was 80 years old. There will be a viewing held at the MMS Payne funeral home on Wednesday, September 4th, from 1:00-8:00 PM; family will be receiving visitors from 6:00-8:00 PM during that time. The celebration of his life will be held at 2:00 PM CT, Thursday, September 5th, 2019 at Claremore Assembly of God Church; burial will immediately follow at Woodlawn Cemetery of Claremore. Born December 23, 1938, in Tiawah, Oklahoma to Virgil Eugene and Clara Louise (Ulrey) Copp, Pat graduated from Claremore High School with the class of 1957.  After graduation, he joined his sister JoAnn in California for a time, working for Douglas Aircraft. He returned to Oklahoma and attended classes in Stillwater, receiving his Fire Protection Engineering degree from Oklahoma State University. After college, Pat began working for Industrial Risk Insurance, with a territory that extended from St. Louis to New York. It was during this time that he met his wife, Carpathia Sue Ingersoll, an English teacher from Tulsa, as a result of family friendships. Pat and Sue’s brothers (Dwayne and Jerry) were friends in the Claremore National Guard, and the two brothers arranged for them to meet, thinking they would be a great match. They were right! On December 26, 1965, Pat and Sue were married in Salina, Oklahoma. Pat’s career took them from Kansas City to Denver to Chicago to Albuquerque. It was in Albuquerque where he began his career with the US Department of Energy. Pat loved this role due to his great patriotic nature. He was generous with his time and would help anyone in need. But more than anything, Pat lived for his family, and he loved time with his friends. He was a man of few words, but when he talked, it did you well to listen. Everyone loved this quality of his. As to hobbies, Pat loved coaching his kids in soccer, cars and hot air balloons. He never missed a game; he never missed the Albuquerque International Balloon Fiesta; and he felt at home in his membership in the Pajarito T-bird Club in Albuquerque, where he would showcase his 66 Ford Thunderbird. Those family members that preceded Pat in death include his parents, Virgil and Clara Copp, and his brother-in-law Hal Smith.  He is survived by his wife Sue; his children Farrah Suzanne Copp and Justin Patrick Copp & Justin’s wife Erin; his sister JoAnn Smith and brother Jerry Copp & Jerry’s wife Tracy; his mother-in-law Veronica Ingersoll; his brother-in law Dwayne Ingersoll & wife Mary; his brother-in-law Tony Ingersoll, and his nieces and nephews who he loved so very much.

The family of Virgil "Pat" Copp created this Life Tributes page to make it easy to share your memories.

Send flowers to the Copp family.