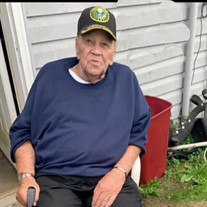 Walter Howard “Moose” Huston was born October 30, 1937 in Chelsea, Oklahoma to Orval and Grace Huston. Howard made his way to Heaven on April 8, 2021. Howard had a deep love for God, his country, and his family. April 1, 1957, he started working as an iron worker. He married the love of his life, Linda on June 13, 1959, and was drafted into the Army in 1960 where he served his country for 2 years. After returning home from the army, he took back up work as an iron worker where he retired on October 1, 1999. In his free time, he could be found fishing, hunting, camping, and gardening. He also enjoyed being with his family, he loved nothing more than quality time spent with his kids, grandkids, and great grandkids. Howard is survived by his loving wife of 61 years, Linda Huston. Sisters: Margaret Huston, & Peggy McCreary. Son & daughter-in-law; Bill & Gara Huston. Daughter; Shelly Everett. Grandchildren: Whitney & Ditto Shanholtzer. Hannah & Cody Dill. Jake Everett, and Macy Everett. Great grandchildren, Seth & Ava Shanholtzer, and Hoyt & Jaycee Dill. Howard was preceded in death by his parents, Orval and Grace Huston, in-laws, Vera and Elgin Goins, grandson, Jonathan Everett, sister, Helen Brashers. Visitation will be held Thursday, April 15, 2021 at Chelsea Funeral Home from 2:00-7:00. Graveside services will be held Friday, April 16, 2021 at 2:00 pm at the Chelsea Cemetery.

The family of Walter Howard Huston created this Life Tributes page to make it easy to share your memories.

Send flowers to the Huston family.