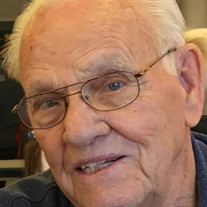 Graveside service for Walter Clinton "Walt" Marlin will be 10:00a.m., Wednesday, January 20, 2021 at Woodlawn Cemetery.  Friends may visit at the funeral home on Tuesday, January 19 from 3pm-5pm.  Walt passed away on Wednesday, January 13, 2021.  He was 96. A Celebration of Life service will be planned in the future since covid restrictions don’t allow us to celebrate safely as we’d like. Walter Clinton "Walt" Marlin was born September 14, 1924 in rural Rogers County to Herman Paul and Virgie Estella (Casey) Marlin, he attended school in Claremore and graduated with the class of 1944.  Walt served his country in the US Army and following his honorable discharge, he returned to Claremore.  In September of 1950 he married Ellen Ruth Vanzant and the couple made Claremore their home through the years.  Ellen passed away in December 2006 after 56 years of happy marriage. Walt later married Alma Taber.     Walt worked for the local Ford Dealership and had a very successful career as a top notch mechanic and wrecker driver, retiring from Jack Kissee Ford.  Through the years, he helped many people in some of their most difficult times even if they could not pay.  His kind and caring nature was evident in his everyday walk-of-life.  Walt was an active member of the New Hope Church of God and he delighted in spending time with his church family.  His family was priority and being a child at heart, he made sure he attended most every event his grand and great grandchildren had.   Those family members that survive include his wife Alma Marlin; his son Richard Marlin and wife Sandy of Edmond, Oklahoma and his daughter Brenda Igarta and husband Rome; grandchildren Amy Igarta Seipp and husband Dan, Stacey Short, Jenna Igarta Louderback and husband Mitch, Katy Igarta, and Jessica Marlin-Lapczynski and husband Chris; great grandchildren Jack and Mark Seipp, Ansley and Elsa Louderback, Bryce and Garrett Short, and Dillon Marlin Lapczynski; sister Linda Young and husband Dr. Larry Young and several nieces and nephews.  Walt was preceded in death by his parents, wife Ellen Marlin, siblings Alma Jean Hanson and Paul Marlin. You may honor Walt's memory by making a contribution to either New Hope Church of God, 1904 North Sioux Avenue, Claremore, Oklahoma 74017, or American Parkinson Disease Association, Oklahoma Chapter, P.O. Box 3113, Broken Arrow, Oklahoma 74013.

The family of Walter "Walt" Clinton Marlin created this Life Tributes page to make it easy to share your memories.

Graveside service for Walter Clinton &quot;Walt&quot; Marlin will be 10:00a.m.,...

Send flowers to the Marlin family.