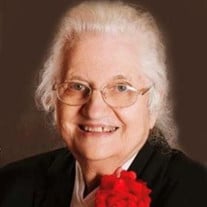 Wilma received her Heavenly reward on Saturday, October 9, 2021. She was 88 years old. The fifth child and fourth daughter of Toy William Criner and Clara Sylvia (Stage) Criner was born November 29, 1932, in Haskell, OK. She had two brothers and five sisters. She spent her early years growing up as a farm girl. She attended Mt. Olive School, west of Haskell, for the 1st through 8th grades. She received her 8th grade diploma from the Rothammer School south of Coweta. Her family attended the Old Mission Church at Coweta, and this is where she received her call to preach, at the young age of 15. From 1947 to 1954, Wilma evangelized on her own. On December 1, 1954, Wilma married Jimmy Millikin, and became his evangelistic partner. For the next ten years, they were traveling evangelists, until 1964, when they built the Trinity Pentecostal Church in Pryor, OK. In 1968, they began evangelizing again, until 2014, when they again became pastors in Pryor. Wilma spent 73 years as a minister of the gospel, and minister's wife. She also was a wonderful mother, sister, and friend to many. Wilma took great pride in her family, who all helped in the work of the ministry. She is survived by her son Jimmy John Millikin and wife Shauna; grandchildren Carli Rose Millikin and Landon John Millikin; and numerous siblings, nieces, nephews, and other extended family. She is preceded in death by her parents; husband Jimmy Don Millikin; and sons, Jimmy Dewayne Millikin, and Marty Don Millikin. View and sign Wilma's online memorial at www.mmsfuneralhomes.com.

The family of Wilma Louise Millikin created this Life Tributes page to make it easy to share your memories.

Send flowers to the Millikin family.