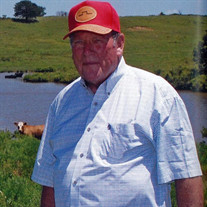 Graveside services for Win Ingersoll will be 2:00 pm Thursday, November 19, 2020 at the Ingersoll Family Cemetery (Masks are suggested). If unable to attend, service will be live streamed on MMS-Payne Funeral Home Facebook page. Visitation will be held at the First United Methodist Church in Inola on Wednesday, November 18 from 1pm-7pm with family receiving visitors from 5pm-7pm. Win Ingersoll passed away on Thursday, November 12, 2020. He was 77. The son of Winthrop and Mary “Frannie” Walter Ingersoll was born January 23rd, 1943 in Tulsa, Oklahoma. As a young boy Win was raised in rural Rogers County just east of Claremore. There he would begin his education at Harmony Starr school. Over the next several years Win’s education would take him to Tulsa and Arizona before completing and graduating from Selwyn School in Denton, Texas in 1961. Wanting to continue his education, Win enrolled at NEO in Miami, eventually transferring to Oklahoma State University. It was there that he would reconnect with childhood friend Kay Huff. They would begin dating and would marry on June 19, 1965. The newly wed couple would begin their life together on the historic Mcfarlin Ranch, a place Win had worked throughout his childhood. The next several years Win would learn the ropes of running the ranch by working with various ranch foremen, specifically Puney Martin. In the early 70’s Win began running all the day-to-day operations of the ranch, propelling it into what it is today. Apart from the ranch, Win served on many boards and in numerous organizations such as the Oklahoma and the National Cattleman’s Association, and the Oklahoma Horsemen’s Association, where he served as president. He was also instrumental in bringing para-mutual betting to Oklahoma. He was one of the original organizers of First Federal Savings and Loan, which today is BancFirst in Claremore. Win was also a philanthropist at heart. He and wife Kay sponsored many events to help raise money for different organizations in his area. One of the most well known of these events was Old Walt’s Haunted Hayride. Over the years it raised thousands of dollars supporting local organizations. Another cause true to his heart was wildlife conservation. Quail was his favorite endeavor, everything from field trials to sponsoring a habitat study performed by OSU, all performed on the ranch. In fact in 2012, Win was the recipient of the Nature Works Stewardship Award for his contribution to wildlife conservation. There is a life size bronze entitled “Shinnery Oak Bobwhites” in recognition of Win located at Lafortune Park in Tulsa. Win was a member of the Inola Lions Club for over 40 years. He loved that organization and was proud to be a member. He was instrumental in building the Inola Public Library. Win also has an endowment for agriculture students at Oklahoma State University, and recently he began an endowment at Rogers State University. He was a cornerstone donor for the new Agriculture building at OSU, which begins construction soon. In 2016 he and Kay received the “Private Land Management Award” presented by the Oklahoma Chapter of the wildlife society. In his downtime Win enjoyed watching his beloved OSU Cowboys, fishing, quail hunting, raising bird dogs, and his annual trips to his home in Ruidoso, New Mexico. Win is preceded in death by his parents Winthrop Ingersoll and Mary “Frannie” Ingersoll O’Hornett. Survivors include his wife Kay and daughters Joleta Ingersoll and Wendy Keener and husband Dee, grandchildren Walt and Bryce Spurlock and Razz and Radley Keener; sisters Paula Moore and husband Paul and Niente Smith and husband Bob; brother-in-law Howard “Sandy” Huff and wife Bobbie; along with many nieces and nephews and many, many friends, and his lab Baxter. Kay and Win were members of the Inola United Methodist Church. Memorials can be made in honor of Win to the Win and Kay Ingersoll Endowment for Oklahoma State University by contacting Heidi Williams at [email protected]; The Win and Kay Ingersoll Scholarship at Rogers State University by contacting Tonni Harrald at [email protected]; The Martha Jo “Huff” Myers Memorial Scholarship Fund for Education at [email protected]; or Safenet Services, P.O. Box 446, Claremore, OK 74018.

Graveside services for Win Ingersoll will be 2:00 pm Thursday, November 19, 2020 at the Ingersoll Family Cemetery (Masks are suggested). If unable to attend, service will be live streamed on MMS-Payne Funeral Home Facebook page. Visitation will... View Obituary & Service Information

The family of Win Ingersoll created this Life Tributes page to make it easy to share your memories.

Graveside services for Win Ingersoll will be 2:00 pm Thursday,...

Send flowers to the Ingersoll family.