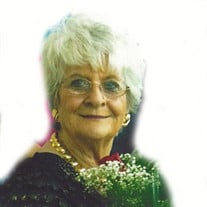 Service for Yvonne Jean Schloss will be 2:00 p.m., Tuesday, April 30, 2019 at Claremore Assembly of God Church; burial will follow at Oakhaven Memorial Gardens. Friends may visit at the funeral home on Monday, April 29 from 1pm-8pm, with family receiving visitors from 6pm-8pm. Jean passed away on Monday, April 15, 2019. She was 84. Yvonne “Jean” Schloss was born at home in Mitchell, Illinois on November 27th 1934, the oldest of 5 children, to Claude Ellsworth and Fern Elizabeth (Grigsby) Corey. She attended Mitchell Senior High School, where she was actively involved in Marching Band, playing the bass drum. Her studies also included secretarial training. She graduated in 1951. Jean took a streetcar to her first job at Granite City Bank and Trust. While working at the bank, she met a handsome young man, Bill Schloss, who lived two doors down from her in Mitchell. He had recently returned from serving in the Army during the Korean War as a cook.Thus a dream was born. They fell in love and were married in 1953, and moved to Tulsa, OK in 1955. Because of their love of people and good food, they made a career choice to own their own restaurant. Landmark coffee shop in Ponca City, Larry's Drive In and G. and E. Burgers, both in Tulsa, and finally Carl's Coney Island, were all family owned and operated by Bill and Jean and their five children. The Coney Island brought the family to Claremore in 1974. Bill moved to heaven in 1999. Beth, their youngest daughter, and her husband Ed Truitt, became the new owners and are still serving Claremore today. Jesus was always first place in her heart, and she raised all her children to have a personal relationship with Him. Jean was an active member of First Assembly of God in Claremore. Her prayer life led her to be involved in several weekly prayer groups over the years. Many in our family today are loving Jesus because of her consistent prayers. Jean always had a song, and would at any given moment burst into singing without notice. One single word would trigger a tune and you would have to stop what you were doing and listen, or join in, because she always had to sing the song from start to finish. Her love of singing led her to learn piano as a girl, but she also played by ear. Music was a part of our everyday household life and we all loved singing in harmony, either around the piano or riding in the car, in music groups, etc. Her never tiring, relentless love of serving people will be the biggest remembrance of our mother. Not only her family, but countless strangers, neighbors, and anyone she called a friend could call her day or night and without question she would help in any way she could. Jean was preceded in death by her parents, Claude “Shorty” and Fern Corey, brother Ronnie Corey, sister Claudia Stephens, and her husband Bill. Those family members that survive include her children, Cheryl and husband Jay Hillsberry of Sand Springs, Judi Schloss of Tulsa, Beth and husband Ed Truitt of Claremore, Philip and wife Terri of Enid, and Mark Schloss of Claremore. Grandchildren include, Scott and wife Sharon Hillsberry, Jeremy and wife Amy Hillsberry, Corey and wife Kelly Dodd, Kelli and husband Kyle Rosebrough, Brooke Smith, Julie and husband Michael Honeycutt, Tayler Truitt, Matt Truitt, Tiffany and husband Matt Fitzsimmons, Weston, Mitchell, and Anne-Lise Schloss, Blake and husband Connor Gordon, and Billy Schloss, 25 great-grandchildren; sister Janice Martin and husband Jerry, and brother Jimmy Corey and wife Julie. We all love you mom. Good bye for now. We'll see you soon!

Service for Yvonne Jean Schloss will be 2:00 p.m., Tuesday, April 30, 2019 at Claremore Assembly of God Church; burial will follow at Oakhaven Memorial Gardens. Friends may visit at the funeral home on Monday, April 29 from 1pm-8pm, with... View Obituary & Service Information

The family of Yvonne "Jean" Schloss created this Life Tributes page to make it easy to share your memories.

Send flowers to the Schloss family.