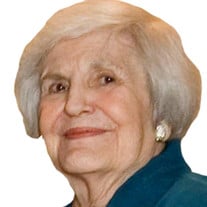 Anne Wood Gilkeson, age 95, passed away peacefully on August 18, 2021 in Claremore, Oklahoma. Anne’s was a life well lived. She was born in Birmingham, Alabama on June 25, 1926 to Girard and Leona Wood. While serving as a secretary in the Naval Department in Birmingham during World War II, Anne met the love of her life, Lt. John S. Gilkeson from Claremore. She and John were married in 1946 and they returned to Claremore to make their home. They remained lovingly married until his death in 1995. Anne was a loyal member of the First Presbyterian Church of Claremore, as well as a long time member of the local chapter of the PEO philanthropic organization. She was a voracious reader, and enjoyed challenging hobbies such as advanced stained glass design and learning about computers and the internet. She was also known as a pretty salty bridge player and loved to host games amongst her many friends. Anne was also a proud member of the Daughters of the American Revolution (DAR), as well as the General Society of Mayflower Descendants. Most of all, Anne was a devoted and loving mother who enjoyed spending time with her family. She is survived by son John S. Gilkeson, Jr. and wife Susan of Tempe, Arizona, daughter Katherine Young and husband Joseph of Lawton, son Wayne Gilkeson of Daytona Beach, Florida, son Stephen W. Gilkeson and wife Debra of Lawton, grandson Joshua Cantwell, with wife Amy and great granddaughter Brentley of Verdigris, and granddaughter Ashley Cantwell of Dallas, Texas. A guestbook and closed viewing will be available through Friday, August 20th at MMS Payne Funeral Service chapel, 102 W. 5th in Claremore. Burial will be a private graveside service for the family at Woodlawn Cemetery on Saturday. In lieu of flowers, the family has asked that donations be made in Anne’s name to the Alzheimer’s Association.

Anne Wood Gilkeson, age 95, passed away peacefully on August 18, 2021 in Claremore, Oklahoma. Anne&#8217;s was a life well lived. She was born in Birmingham, Alabama on June 25, 1926 to Girard and Leona Wood. While serving as a secretary... View Obituary & Service Information

The family of Anne Wood Gilkeson created this Life Tributes page to make it easy to share your memories.

Send flowers to the Gilkeson family.