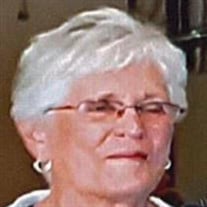 Funeral service for Barbara Sue Cooper will be held 10:00 a.m. Monday, October 26, 2020 at the MMS-Payne Funeral Home Chapel. Burial will follow at Hogan Cemetery in Locust Grove. Visitation will be held on Sunday, October 25, 2020 from 3-6 p.m. Sue passed away on Tuesday, October 20th, 2020 at the age of 81. The daughter of Robert "Bus" and Kathleen Holden Robinson was born September 27th, 1939 in Pryor, Oklahoma. She was raised in Locust Grove, where she graduated high school in 1957. It was also in Locust Grove that she met Donald Cooper. They would mary on September 5, 1957. Shortly after marriage, the newly wed couple moved to California. Over the next few years the couple would share time between California and Oklahoma. In 1965 they made their final move to Oklahoma, settling in Tulsa. During the next several years Sue's focus was on raising her family. Wanting to raise her kids in a smaller town, she and her family moved to Claremore in 1970. After her children were grown, Sue decided to return to work. She began working at the Wal-Mart pharmacy. She retired in the mid 1990's after 15 years of service. In her spare time Sue had many hobbies and past times she enjoyed. She was a member of the local Pocahontas Club. She loved traveling in the RV with Don. Together the two visited almost every state in the union, camping and playing music, although she would admit that the mountains out west were her favorite destination. She also enjoyed reading, and would often be found just sitting outside enjoying nature with a book in hand. However spending time with her children and grandchildren was what she definitely enjoyed the most. She is preceded in death by her parents, Bus and Kathleen Robinson. Survivors include her husband Don; children, Donna, Donald James, Robert Lee, and Michael Edward; grandchildren, Brandi Hall, Sarah Carver, Dalton Patronek, James Cooper, Drew Hopson, and Rebekah Holt; great-grandchildren, Mercedes Bradley, Kaitlyn, Harle, and Gareth Hall, Zachary Surowiak, Raleigh Patronek, and Collin and Brock Carver; sister, Roberta Chance; brother, Edward Robinson, and many friends and neighbors.

Funeral service for Barbara Sue Cooper will be held 10:00 a.m. Monday, October 26, 2020 at the MMS-Payne Funeral Home Chapel. Burial will follow at Hogan Cemetery in Locust Grove. Visitation will be held on Sunday, October 25, 2020 from 3-6... View Obituary & Service Information

The family of Barbara Sue Cooper created this Life Tributes page to make it easy to share your memories.

Send flowers to the Cooper family.