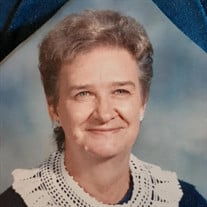 Funeral service for Barbara Czapansky will be held 10:00 a.m. Tuesday, July 28, 2020 at New Hope Church of God. Pastor Mark Tincher will officiate. Burial will follow at Chelsea Cemetery. Barbara Lucille Czapansky passed away on Thursday, July 23rd, 2020 at the age of 84. The daughter of Carl and Lucille Bloxson Simmons was born October 16th, 1935 in Ponca City, Oklahoma. She would spend her entire childhood in the Ponca City area. Eventually she would begin her working career at a local cafe. There she would met Herman "Gene" Czapansky. They would begin dating and married on May 12, 1954. Over the next several years Barbara and Gene would live in places such as Pond Creek, Carmen, and Wagoner before moving to Chelsea in 1968. Once again Barbara took a job working in food service. This time at a local diner named the Bow-Inn Restaurant. She worked there for several years, until she eventually became the owner. In the years to follow, not being fully ready to retire Barbara took jobs working at the Chelsea Nursing Home and after it shut down, the Chelsea school cafeteria. In her spare time Barbara had many things she enjoyed. Things such as crocheting, playing bingo, and raising flowers. However her happiest times were spent spending time with her family, especially her grandchildren. She is preceded in death by her parents, Carl Simmons and Lucille Nelson, husband, Herman Eugene Czapansky, and granddaughter, Madeline Clark. Survivors include her children, Darrel McKinney and wife Claudia of Yale, Doyle Czapansky and wife Tamra of Broken Arrow, Dennis Czapansky and wife Candi, Elizabeth Cresswell, of Broken Arrow, Nalene Aery and husband Mike of Inola, Timothy Czapansky and wife Lynne of Broken Arrow, Leslie Czapansky and Dandre of Elgin, Illinois, and Charles Czapansky and wife Stephanie of Vinita; 33 grandchildren, 63 great-grandchildren, and 17 great-great-grandchildren; siblings, Jeanie Park and husband Frank, Bob Simmons and wife Dee, Larry Nelson, Kathy Griffith, and Ethel Gregory and husband Bill. View and sign Barbara's online memorial at www.mmsfuneralhomes.com

The family of Barbara Lucille Czapansky created this Life Tributes page to make it easy to share your memories.

Funeral service for Barbara Czapansky will be held 10:00 a.m....

Send flowers to the Czapansky family.