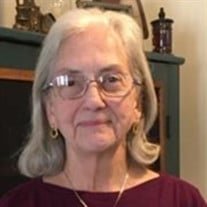 On Monday, August 10, 2020, Barbara Mathis, loving mother and grandmother, passed away at the age of 72.   Barbara was born on March 29, 1948, in East Cleveland, Ohio, to Stanley and Carol (Stewart) Philpott. The Philpotts and their six children ended up settling in the Santa Ana area of California where Barbara would graduate from Santa Ana Valley High School in 1966. Shortly after graduation she met Donald Mathis and fell in love. The two married on April 1, 1967 and Barbara immediately became a step-mom to three young boys. Barbara and her family would move several times over the years due to job assignments and/or business opportunities. They owned several restaurants or retail stores in the different communities that they lived in, but ultimately, Barbara wanted to be there for her kids as they grew up.  By 1990, the family landed in Tennessee, where they stayed for 10 years. In 1996, she decided to stay home until her last child graduated high school. To pass time while her children were in school, she would wait tables at local cafes. In 1999, Don’s job assignment led him to the Dallas/Fort Worth area. They bought a house where they planned to retire and started to settle down. Unfortunately, Don passed away in September of 2000 and left Barbara alone. For the next few years she immersed herself in the love and comfort of her children and grandchildren. In 2008, Barbara made the decision to move to Claremore, Oklahoma where her youngest daughter and family lived. She settled immediately into the small town camaraderie that Claremore has to offer. She found herself volunteering at the senior center and making some of the best friendships she has ever had. She enjoyed her weekly domino games, making crafts with her friends and grandkids, keeping her garden up, cooking and baking, taking girls trips with her friends, and most of all spending time with her grandkids.   Barbara is preceded in death by her parents Stanley and Carol Philpott, her husband Donald Mathis, and her three brothers Marty, Brien, and Ricky Philpott.   She is survived by her sons Corwin and his wife Erin of Denton, Texas, Michael and his wife Ashlee of Arlington, Texas, daughter Lisa and her husband Jason Northern of Owasso, Oklahoma; 3 step-sons, 10 granddaughters, 5 grandsons, two great-granddaughters, extended family, and a host of dear friends.  At Barbara’s request no service will be held; however, a visitation will be held at MMS Payne Funeral Home in Claremore on Thursday August 14, 2020 between the hours of 3pm and 6pm

On Monday, August 10, 2020, Barbara Mathis, loving mother and grandmother, passed away at the age of 72.   Barbara was born on March 29, 1948, in East Cleveland, Ohio, to Stanley and Carol (Stewart) Philpott. The Philpotts and their six... View Obituary & Service Information

The family of Barbara Marie Mathis created this Life Tributes page to make it easy to share your memories.

Send flowers to the Mathis family.