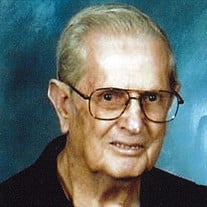 Funeral service for Benton Chaney will be held September 27, 2019 at the House of Prayer Church. Pastor Denton Hubbard will officiate. Burial will follow at Oakhaven Memorial Gardens under the direction of the MMS-Payne Funeral Home & Cremation Service. Benton Russell Chaney went home to be with the Lord on September 24th, 2019, at the age of 88. The son of James and Wynona Plew Chaney was born July 11th,1931, in Claremore, Oklahoma. Benton spent the majority of his life in the town where he was born. As a young adult Benton became an active member of the Westside Holiness Church. It was there that he would first meet Thelma Patton. The two began dating, and married on October 20, 1949. The newlywed couple continued living in Claremore. Over the next several years Benton would support his family through various jobs. For a short time he worked at a local sawmill, before taking a job with McDonnell Douglas in the early 1950's. He was later laid off from Douglas, and took a job doing road construction for Standard. He worked there for the next 19 years, before taking another foreman job for Keck Construction. He worked there until retiring in 1993. Benton was a man with few hobbies. However he did find time for things he enjoyed. Things such as bowling, and the occasional road trip through the mountains. He also enjoyed fishing, so much that he eventually purchased a house on the lake. During his time there, not only did he enjoy the fishing, but he enjoyed building. In fact he enjoyed building so much that he added onto every side of his house at the lake. In 2005 Benton and Thelma decided to return home to Rogers County. They made their home in the Dog Creek hills, before moving into Claremore in 2012. During those years Benton was an active member of the House of Prayer Church. He is preceded in death by his parents James and Wynona; grandson, Bryan Chaney, three sisters, and five brothers. Survivors include his wife Thelma of the home; daughter, Linda Horton and husband Charles; son, Russell Chaney and wife Vickie; grandchildren, Lisa, Lori, Lance, Chris, Lauren and Eric; great-grandchildren, Cooper, Glorie, Trinity, Brandon, Clayton, Peyton, and Jace, along with many other family members and friends. Memorials may be made to St. Jude Children's Research Hospital at 501St. Jude Place, Memphis, TN 38105, or the Shriners Hospitals at 2900 Rocky Point Drive Tampa, Fl 33607. View and sign Benton's online memorial at www.mmsfuneralhomes.com

Funeral service for Benton Chaney will be held September 27, 2019 at the House of Prayer Church. Pastor Denton Hubbard will officiate. Burial will follow at Oakhaven Memorial Gardens under the direction of the MMS-Payne Funeral Home & Cremation... View Obituary & Service Information

The family of Benton Russell Chaney created this Life Tributes page to make it easy to share your memories.

Funeral service for Benton Chaney will be held September 27,...