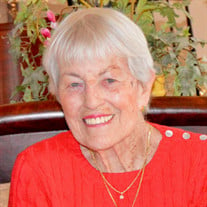 Irene Harris was born in Seattle Washington on October 24, 1931 to Richard and Bertha Smith. The youngest of three children, the family moved to the Seattle suburbs of Ballard and later Edmonds, Washington to accommodate Irene’s love of horses and dreams of owning one. Irene was an excellent student and talented musician as a child, graduating from high school at the age of 15. Too young to begin college, Irene began working as a secretary in Seattle until she was later accepted into Washington State University where she studied Animal Husbandry. Irene’s horse went with her to Washington State and she boarded it at local stable. Howard Harris III was also boarding horses at this stable while attending the University of Idaho and their mutual interests in horses and western life were soon discovered, and they fell in love. They were married August 8, 1953, in Seattle. The couple spent much of their first year of marriage in Idaho before moving east in 1954 to Pilesgrove, New Jersey, Howard’s hometown. While living in New Jersey, the couple operated the family farms and Cowtown Rodeo and Markets. Irene was truly a partner to Howard in all aspects of their life together, including managing and participating in all aspects of these operations. Howard had great respect for her abilities, especially when it came to her knowledge and handling of livestock and horses. He often said – “Irene can ride horses that I can’t lead.” She had a great love for dogs as well and always had a several she pampered. The couple lived in Pilesgrove until retiring to Claremore, OK in 1988. Irene loved to play bridge and was active in as many bridge clubs as would have her. She was also active in many social and philanthropic organizations including Beta Sigma Phi, Omicron Master, Aladdin Club, and PEO. After retirement, she enjoyed cruising with her bridge friends -- so they could play while they were at sea. She was also an expert at crossword puzzles and the day didn’t begin until she had completed at least one. Irene is survived by her daughter, Kathleen Harris of Tulsa, Grant Harris (wife Betsy) of Pilesgrove, NJ and daughter-in-law Mary Ann Heaney (husband Rodney) of Alloway, NJ, six grandchildren, and nine great grandchildren. Irene was preceded in death by her husband, Howard, her son, Andy Harris, her brother, Richard Smith, and sister, Roberta Carlson. A service to celebrate her life will be held on Saturday April 16, 2022, at her ranch in Claremore, updates to follow. In lieu of flowers, donations may be made in her memory to: Compassion International Attn: Sponsor Donor Processing 12290 Voyager Pkwy Colorado Springs, CO 80921

Irene Harris was born in Seattle Washington on October 24, 1931 to Richard and Bertha Smith. The youngest of three children, the family moved to the Seattle suburbs of Ballard and later Edmonds, Washington to accommodate Irene&#8217;s love... View Obituary & Service Information

The family of Beulah Irene Harris created this Life Tributes page to make it easy to share your memories.

Send flowers to the Harris family.