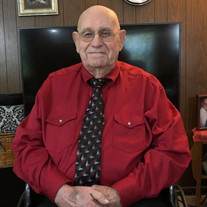 Service for Billy Joe Harris will be 10:00 a.m., Monday, January 27, 2020 at King Road Baptist Church, Claremore; burial will follow at Washington Cemetery. Friends may visit at the funeral home on Sunday, January 25, 2020 from 1pm-6pm, with family receiving visitors from 2pm-4pm. Billy passed away on January 21, 2020. He was 82. Born April 17, 1937 in Blanchard, Oklahoma to Thomas Edker and Ruby Viola (Hackworth) Harris, Billy was reared and educated in Chelsea, Oklahoma. He first attended school in Bushyhead and then on to Chelsea, where he graduated with the class of 1956. Following his graduation Billy went to line and type printing school in Nashville, Tennessee. On March 15, 1959, Billy married Rhetha Jean Johnson and the couple made their home in Tulsa for the first 36 years, later moving to Claremore and this has been home until a year ago when they moved to Tulsa. Billy's work career started as a printer with a magazine called Hunter's Horn, he later worked for the Tulsa World, until his job became computerized. Billy drove a dump truck and later a cement truck for a time. Then he began working as a security guard for C. Davis and Associates, until his retirement. Billy enjoyed working on cars and small engines, and loved watching western movies. Those family members that survive include his wife Rhetha Harris; his children Dennis Michael Harris and wife Shelia Kay all of Tulsa, Lisa Hardy and husband Wayne of Stillwater, and Randall Lee Harris also of Tulsa; grandchildren Daniel Hardy and wife Sierra, Samuel Hardy and wife Brielle, and Emmalee Hardy; great grandson Lincoln Hardy and great granddaughter on-the-way, Adeline Hardy; sisters Martha Duvall and Donnie Griffin. Billy was preceded in death by his parents, 2 brothers and 2 sisters.

Service for Billy Joe Harris will be 10:00 a.m., Monday, January 27, 2020 at King Road Baptist Church, Claremore; burial will follow at Washington Cemetery. Friends may visit at the funeral home on Sunday, January 25, 2020 from 1pm-6pm, with... View Obituary & Service Information

The family of Billy Joe Harris created this Life Tributes page to make it easy to share your memories.

Send flowers to the Harris family.