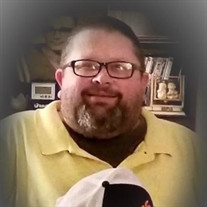 Graveside services celebrating the life of Billy Jack Harvell, Jr., 51, of Inola, Oklahoma, will be Friday, May 29, 11:00 A.M. at Sweeten Cemetery in Inola, Oklahoma, under the direction of MMS Payne Funeral Service. Due to Covid-19, visitation will be restricted to the day of graveside services and burial. Family and friends may visit before or after services. Billy Jack was born June 28, 1968, to Diann (Ogdon Harvell) Dodd and Billy Jack (Bo) Harvell, Sr. in Fort Smith, Arkansas. He passed away at his home in Inola, Oklahoma, on May 24, 2020. He started school in Inola, Oklahoma, but soon moved to Muldrow, Oklahoma, where he was a 1987 graduate of Muldrow High School. Billy Jack was an avid sports fan and loved his local teams. He was also a die-hard Oklahoma State Cowboys fan. In addition to watching sports of any season, Billy Jack also had a lot of various other interests. Nearly everyone that knew Billy Jack knew that he enjoyed fishing, but what many people didn’t know was that he enjoyed painting and creating different works of art in his spare time. Participating in community events and helping others was something that Billy Jack took great pleasure in. He had previously served as a volunteer counselor at Muscular Dystrophy summer camps, and was always ready to lend a helping hand. Most all of his adult life, he worked in retail sales. He loved his work, because it involved visiting with people, his favorite past time of all. He rarely met a stranger, but if he did it wasn’t long before they were friends. His heart was big and open to everyone. He dearly loved his family and friends, especially his nieces and nephews. The role of “Uncle” was very special to him. Billy Jack was loved by all whose lives he touched. He will be remembered lovingly and greatly missed. Billy is survived by his father Billy Jack (Bo) Harvell, Sr. and wife Cindy of Waxahachie, TX, and his step-father Doug Dodd of Inola, OK. Two sisters: Angel (Harvell) McMore of Dallas, TX, Whitney (Harvell) Christopher and husband Blake of Waxahachie, TX. Two step-sisters: Connie (Dodd) Duncan and husband Shawn of Porum, OK, Amanda (Dodd) Frye and husband Michael of Cleveland, OK. Nieces and nephews: Bryan McMore of Dallas, TX, Kevin McMore of Little Rock, AR, Sarah McMore of Inola, OK, Brooke, Harper, and Wyatt Christopher of Waxahachie, TX, Kayla Duncan of Edmond, OK, Audrey Stout of Inola, OK, Chandler Stout of Porum, OK, Sierra and Jacob Duncan of Porum, OK, Adam and Olivia Frye of Cleveland, OK. Billy Jack was preceded in death by his mother Diann Dodd. Honorary pall bearers are Bryan McMore, Kevin McMore, Blake Christopher, John Paul Harvell, Alex Neal, Logan Neal, Eric Odgon, Jacob Duncan, and Adam Frye. The family of Billy Jack Harvell, Jr. would like to extend their sincere appreciation for the kind words, acts of kindness, and love shown to us during the loss of our son, brother, uncle, and cousin.

Graveside services celebrating the life of Billy Jack Harvell, Jr., 51, of Inola, Oklahoma, will be Friday, May 29, 11:00 A.M. at Sweeten Cemetery in Inola, Oklahoma, under the direction of MMS Payne Funeral Service. Due to Covid-19, visitation... View Obituary & Service Information

The family of Billy Jack Harvell Jr. created this Life Tributes page to make it easy to share your memories.

Send flowers to the Harvell family.